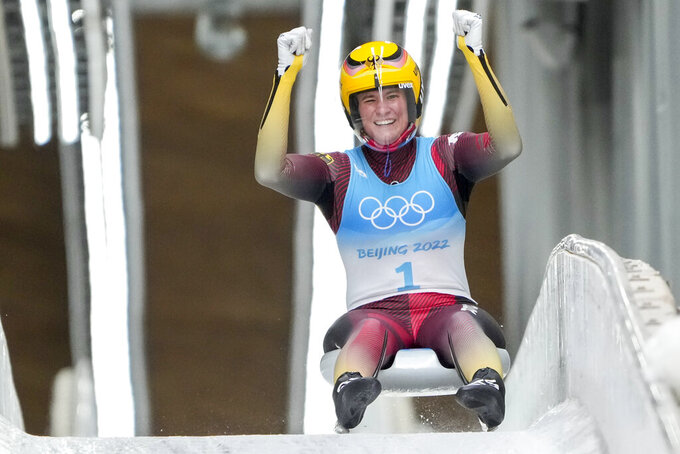 German slider Natalie Geisenberger, who has won the last three Olympic women's luge gold medals and is considered by many to be the most dominant athlete in her sport's history, is pregnant with her second child.

Geisenberger made the announcement over the weekend on social media. Her first child, Leo, was born in 2020. Geisenberger took off the 2019-20 season, then returned in 2020-21 to win her eighth overall World Cup championship.

This past season, she finished third in the World Cup standings but was dominant in the race that mattered most — winning Olympic gold at the Beijing Games by nearly a half-second over fellow German Anna Berreiter.

Geisenberger's post did not make any reference to her luge plans. She posted four sets of footwear — one for her husband, one for her, one for Leo and a pair of socks for the unborn baby — as her way of making the announcement, writing, “We are so looking forward to seeing you!"

She was noncommittal about her future in sliding after the Beijing Games. Geisenberger has 52 World Cup victories, plus six Olympic gold medals — the three individual ones, plus three from the relay wins that she was part of at Sochi in 2014, Pyeongchang in 2018 and Beijing this year.

“I’m doing very well so far," Geisenberger said. “We are totally happy and are looking forward to baby number two. It’s just a very nice enrichment for our family."

Geisenberger's pregnancy means the World Cup luge circuit will be without both reigning Olympic gold medalists this season. Johannes Ludwig of Germany, who won gold at Beijing as part of his country's sweep of all four Olympic luge events, announced his retirement in May.