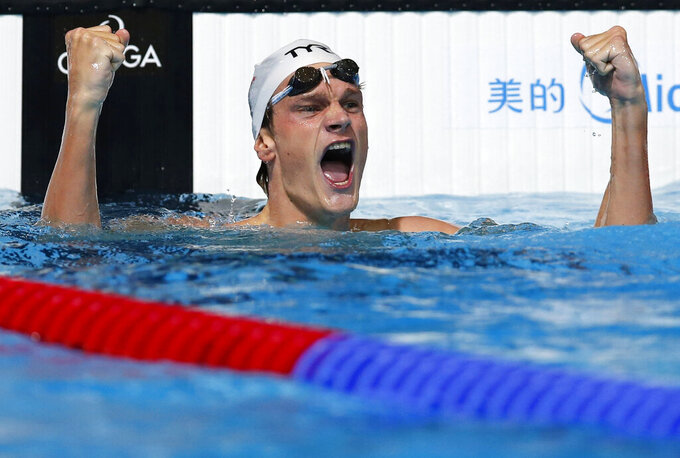 FILE - France's Yannick Agnel celebrates after winning the gold medal in the Men's 200m freestyle final at the FINA Swimming World Championships in Barcelona, Spain, Tuesday, July 30, 2013. More details have emerged over an investigation into the alleged rape of an underage girl by two-time Olympic swimming champion Yannick Agnel of France, who was arrested last week in Paris. Agnel was handed preliminary charges as part of the investigation after being sent to Mulhouse, eastern France. On Monday Dec.13, 2021, Mulhouse prosecutor said the events allegedly took place in 2016 in several locations including Spain, Thailand and Brazil.(AP Photo/Michael Sohn, File)

PARIS (AP) — Two-time Olympic swimming champion Yannick Agnel has admitted to having a relationship with an underage girl but denied coercion, the prosecutor in the Frenchman’s rape case said Monday.

Prosecutor Edwige Roux-Morizot said Agnel “recognizes the materiality of the alleged facts” but she said he did not have “the feeling that there was coercion.”

“If the facts constitute rape or sexual assault, it is because there is a significant age difference,” Roux-Morizot said.

Agnel was 24 when the alleged rape took place. The girl was reportedly 13.

Agnel was arrested in Paris last week. On Saturday, he was handed preliminary charges and the case was sent to Mulhouse, eastern France.

Roux-Morizot also said the events took place in 2016 in several locations, including Spain, Thailand and Brazil.

In France, an adult cannot have consensual sex with somebody under 15 years old. Earlier this year, the French parliament adopted legislation that characterises sex with a child under the age of 15 as rape and punishable by up to 20 years in jail, bringing its penal code closer in line with many other western nations.

French media has said the investigation was launched after a swimmer who trained with Agnel in Mulhouse from 2014-16 filed a lawsuit. L’Équipe newspaper said several swimmers, current and retired, have already been questioned as part of the investigation.