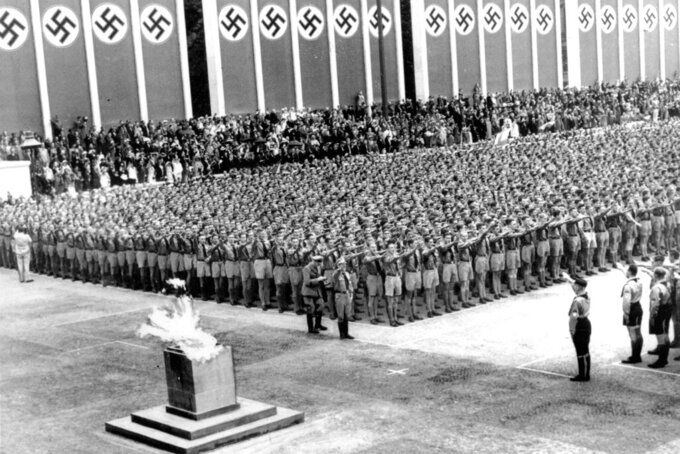 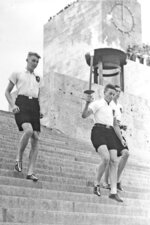 TOKYO (AP) — The torch relay was not always a fixture of the modern Olympics, which began in 1896.

The relay tradition started at Adolph Hitler's 1936 Berlin Olympics — the Games of the XI Olympiad — and was the brainchild of Carl Diem, who was the head of the organizing committee.

The Tokyo Olympic relay is scheduled to begin its Japan leg on March 26 in northeastern Fukushima prefecture.

Tony Perrottet, in his 2004 book “The Naked Olympics” — published to coincide with the 2004 Athens Olympics — captured the paradox of the Nazi regime appropriating the relay.

“Ironically, considering its repellent origins, the torch race has come to symbolize international brotherhood today, and remains a centerpiece of our own pomp-filled Olympic opening ceremonies,” Perrottet wrote.

He added: “The Nazis knew a good propaganda symbol when they saw one.”

Perrottet recounts how the Olympic flame was run from Greece to Germany over 12 days, ending with the lighting of a “colossal brazier in the Berlin stadium before the Führer's approving gaze.” Each of the torches carried the logo of German arms manufacturer Krupp, Perrottet wrote.

The first person to set off on July 20, 1936, was Greek athlete Konstantin Kondylis. The torch meandered through Greece, Bulgaria, Yugoslavia, Hungary, Austria, Czechoslovakia and Germany with each runner covering a kilometer — or .62 miles.

Perrottet wrote that Hitler admired the images of Greek gods and goddesses and wanted the Olympics to promote his idea of the supremacy, the perfection, of the German nation.

“Hitler took considerable personal interest in the ritual, and pumped funds into its promotion: The Nazi propaganda machine covered the torch relay slavishly, broadcast radio reports from every step of the route, and filled the Games with the iconography of ancient Greek athletics.”

The first Olympic flame appeared at the 1928 Amsterdam Games, and then again in 1932 in Los Angeles.

“Very little is known about the 1928 and 1932 flames, but they were lit on site and not at Olympia,” Dr. Bill Mallon, a former president of the International Society of Olympic Historians, said in an email to The Associated Press.

There was no relay until 1936, and it's been continuous since then. The Olympics were canceled during World War II (Tokyo was to hold the 1940 Games) and resumed in London in 1948. There have been modifications along the way.

More recently, for the 1994 Winter Olympics in Lillehammer, Norway, the torch was lit in Greece and a second torch was lit in Norway. Having two flame origins did not please the tradition-steeped Greeks.

The relay was “commercialized” at the 1984 Los Angeles Olympics when relay sponsor AT&T sold “kilometer legs” of the event to allow people to run with the torch. Coca-Cola became the sponsor in Barcelona in 1992.

“Greece was not happy with that in 1984 and threatened to not let Los Angeles light their flame in Olympia,” Mallon wrote. “It was enough of a problem that Peter Ueberroth (chairman of the organizing committee) and Juan Antonio Samaranch (IOC president) actually made contingency plans for the relay in case the Greeks held to their threat. They eventually backed off and the flame was lit in Ancient Olympia in 1984."

The 2008 Beijing Olympic torch relay ran into trouble as well. The Chinese relay, in addition to a domestic route, also circled the globe. It was targeted along the way by anti-China and pro-Tibet protests at half the stops. Taiwan also boycotted the relay when China wanted to include it on its domestic route — implying Chinese sovereignty over the self-governing island.

China’s authoritarian government has viewed Taiwan as a renegade province since the two separated in the 1949 civil war. Taiwan, which is also known as the Republic of China, governs itself as an independent state.

The chaos at the time led IOC President Jacques Rogge to say the Olympics and the relay were in “crisis.” After the Beijing Olympics ended, the IOC did away with the international portion of the relay.