An Olympics like no other, Tokyo perseveres to host Games 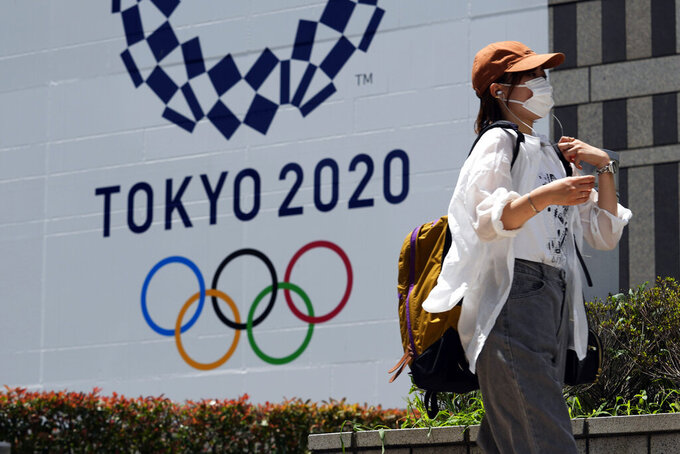 FILE - In this Tuesday, July 20, 2021, file photo, a woman wearing a protective mask walks in front of a Tokyo 2020 Summer Olympics display at the Tokyo Metropolitan government in Tokyo. The Tokyo Olympics have already broken new ground because of the 12-month delay caused by the coronavirus pandemic, pushing it into an odd-numbered year for the first time. But with no fans permitted in Japan, foreign or local, it has the undesirable distinction of being the first Games to be held with no spectators. (AP Photo/Kiichiro Sato, File)

TOKYO (AP) — It's an Olympics like no other — and the Tokyo Games are surely that — but this is an event that has persevered through wars, boycotts and now a pandemic over its 125-year modern history.

The Tokyo Olympics have already broken new ground because of the 12-month delay caused by the coronavirus pandemic, pushing it into an odd-numbered year for the first time. But with no fans permitted in Japan, foreign or local, it has the distinction of being the first Games without spectators.

“We’re in uncharted territory," said Steve Wilson, the former president of the Olympic Journalists Association who covered the Olympic movement for The Associated Press for nearly three decades until 2017.

“These will be Games without the carnival atmosphere, celebration and fun that we’ve come to expect and look forward to. Definitely one for the history books.”

Dozens of countries, mainly from Africa, boycotted the 1976 Montreal Games to protest New Zealand's sporting ties to the South African apartheid regime. South Africa was banned from competing from 1964 to 1988 because of apartheid.

The 1940 Games were supposed to be held in Tokyo, but upon the return of the Olympics in 1948, London was chosen as host. Tokyo had to wait until 1964 to host the Games for the first time.

And then there was 1920, an Olympics held in Antwerp, Belgium, that took place as the world was emerging from both World War I and a flu pandemic that killed more than 50 million people.

“In a minimum of time, they organized the Games, but they were relatively improvised Games,” Roland Renson, a Belgian sports historian, told the AP last year. “They had to do it with the means they had at their disposal, and they were at that time far from abundant in a city so heavily hit by war.”

Another odd Olympic occurrence came at the 1956 Melbourne Games, when the equestrian events were held in Stockholm because of animal quarantine regulations in Australia.

Originally called the “Athens International Olympic Games” and sanctioned by the IOC, they are now known as the Intercalated (or Intermediary) Games of 1906 — hosted halfway between the normal four-year Olympic cycle. They were ruled unofficial in 1949, according to Olympic historian David Wallechinsky.

Tragedy has also marked the Olympics, most notably when 11 members of the Israeli team were murdered by the Palestinian terrorist group Black September at the 1972 Munich Games and when a bomb exploded in the Olympic Park at the 1996 Atlanta Games.

Other host cities have turned down the right to host the Games. The 1908 Olympics, for instance, were originally awarded to Rome, but they were relocated to London following the eruption of Mount Vesuvius because the Italian government decided its financial resources would be better spent on rebuilding Naples.

Rome finally hosted the Games in 1960.

One particular Olympics has an especially controversial past: the 1936 Berlin Games. Although the Games were awarded about two years before Adolf Hitler became dictator, they went ahead under Nazism. Jesse Owens, an African American track great, went on to win four gold medals, but he was supposed to compete in only three events, the 100 meters, 200 meters and long jump.

Marty Glickman and Sam Stoller had been two of the presumed team members for the 4x100-meter relay. They were replaced by Owens and Ralph Metcalfe, who won the race alongside Frank Wykoff and Foy Draper in world record time.

“What made the situation ugly," Wallechinsky wrote in “The Complete Book of the Olympics” in 2012, "was that Stoller and Glickman were the only Jews on the U.S. track team, and they returned to the United States as the only members of the squad who didn't compete.”