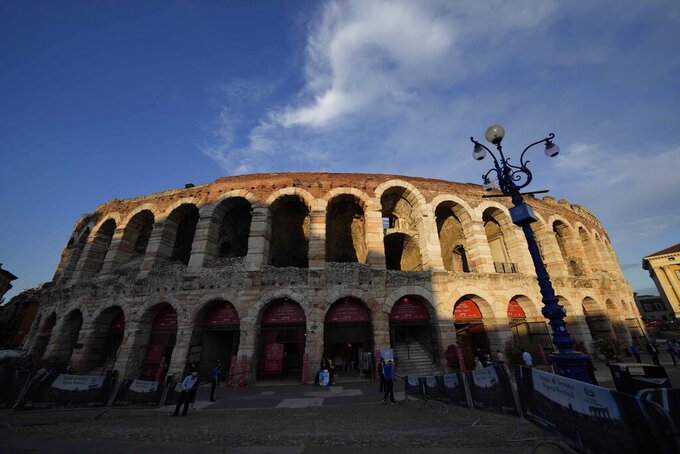 A view of the Arena in Verona, Italy, Friday, June 25, 2021. The opening ceremony for the Milan-Cortina Winter Paralympics in 2026 has been switched from Milan to Verona in a cost-cutting move. The ceremony was slated for the PalaItalia Santa Giulia being built in Milan but will now be held at Verona’s Arena. The large Roman amphitheater in Verona was already slated to host the closing ceremony of the 2026 Olympics. (AP Photo/Luca Bruno)

MILAN (AP) — The opening ceremony for the Milan-Cortina Winter Paralympics in 2026 was switched from Milan to Verona on Tuesday in a cost-cutting move.

Originally slated for the PalaItalia Santa Giulia being built in Milan, the ceremony will now be held at the Verona Arena, a large Roman amphitheater that was already slated to host the closing ceremony of the 2026 Winter Games.

The opening ceremony for the 2026 Olympics remains scheduled for San Siro stadium in Milan.

In a statement after a board meeting, organizers said the move to Verona “comes in line with the principle of economic sustainability and a reasonable optimization of venues and consequently costs containment.”

The venue for the Paralympics closing ceremony has not been announced yet.

Also, the new Olympic sport of ski mountaineering will take place in Bormio, which is also slated to host men’s Alpine skiing.