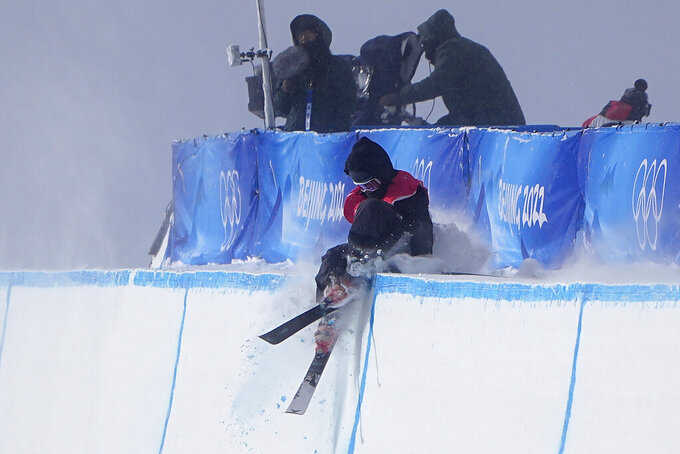 That was his farewell to the Olympics. That, along with a thank-you to the sport of freestyle skiing.

The 30-year-old who once represented the United States and now competes for Britain explained Saturday after the ski halfpipe final that his message was a play on the phrase “Openly Gay.”

He came out in 2015, the year after he won silver in Sochi — an Olympics where he captured headlines, and imaginations, by bringing stray dogs home from the mountain.

“This sport and the Olympics and competing on a professional level has changed my life in ways I could have never imagined,” said Kenworthy, who finished eighth on a blustery day on the halfpipe and in his final competition. “I'm gay. I felt like I didn't fit in, in sport. To be out and proud, competing at the Olympics, and all of the opportunities that have come my way since the Olympics, I couldn't be more thankful.

“I know there's an expiration date and I'm at that date.”

An even more iconic moment came four years later in Pyeongchang when he kissed his then-boyfriend at the bottom of the hill. That kiss was caught by TV cameras and turned into a worldwide sensation. Kenworthy said he was grateful for the moment, because maybe it would make things easier for gay men coming up in sports in the future.

He wanted to make an Olympic curtain call in 2022. The most straightforward path was to compete for his mother's home country of Britain. Some criticized the move by an athlete who was born and trained in the U.S. It's hardly the first time Kenworthy has rocked the boat.

“I'm not everybody’s cup of tea,” Kenworthy said. “I’m out and proud and gay and loud. I think that a lot of athletes really want to kind of feather the line of every different angle and sort of be able to appeal to the masses. I’ve already kind of accepted that that’s not what I’m going to do. So I’m just going to speak my truth.”

He skied away the way he wanted — on his feet. Albeit, a little sore after a wipeout in a previous run.

“I wish I could have done a little more," Kenworthy said. "But overall, I’m still feeling very grateful and proud of the career that I’ve had.”