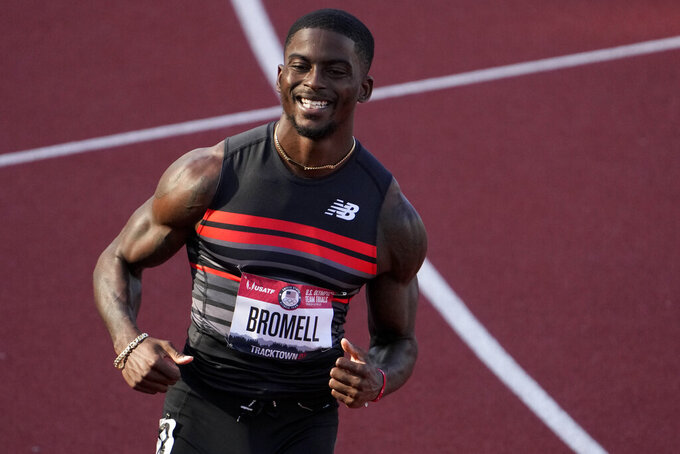 FILE - In this June 19, 2021, file photo, Trayvon Bromell wins the second heat of the men's 100-meter run at the U.S. Olympic Track and Field Trials in Eugene, Ore. The man positioned to take over the sprint game in the post-Usain Bolt world is Bromell. He's a 26-year-old American who is as unassuming as he is fast. (AP Photo/Chris Carlson, File)

TOKYO (AP) — There will be no preening, no posturing, no “To Di World” poses or post-race celebrations that are better than the sprints themselves. No sneering or flexing at the starting line, either.

The man positioned to take over the sprint game in the post-Usain Bolt world is Trayvon Bromell, a 26-year-old American who is as unassuming as he is fast. He's ratcheting things down in track and field after a decade-long fiesta during which the sport stayed relevant on the strength of Bolt's larger-than-life personality.

“I work as if I'm not being talked about,” Bromell said. “And I think that's why I'm able to do the things I'm capable of doing. Because I have a humble, humble spirit.”

He insists he remains that way even though, by almost every measure, he is the favorite in what has long been considered the marquee race of the Olympics — the men's 100 meters, which culminates with the gold-medal race Sunday.

The numbers this year say so: Bromell won U.S. Olympic trials and also has the top time of 2021, at 9.77 seconds. Sports books say so: They list him as the even-money favorite, with American teammate Ronnie Baker next at 4-1. Even Bolt says so: “Bromell is showing great promise,” the three-time Olympic champion said recently when asked for his pick to supplant him as the gold medalist.

Bromell insists he listens to none of it.

“I've always been the person who has put myself as the underdog,” he said.

His humble spirit could very well be a product of all he's had to overcome. Growing up poor in St. Petersburg, Florida, Bromell was fast ever since he can remember. Injuries plagued him through his teens, but his bursts of speed still broke through.

By the time the 2016 Olympic cycle hit, he was expected to test Bolt. But the chance to run pain-free never materialized. He squeaked into the 100-meter final in Rio de Janeiro, but finished last — a mere footnote to the party that surrounded Bolt's third straight gold. He was part of a U.S. relay team that got disqualified and, so, is still seeking an Olympic medal.

Shortly after returning home from the disappointments in Brazil, Bromell had a bone spur removed from his foot.

“When we're kids, we think we're unstoppable and unbreakable, like we can do anything," Bromell said. “In that moment, I realized how human I was.”

Overcoming the injuries took the better part of four years. Bromell raced only lightly in 2017 and 2019, and when the coronavirus pandemic hit, he was still far from 100%. He ran a 9.90 in the midst of the pandemic in July 2020 — a time that made it look like things were back on track.

“It was bad-bad. It took literally like seven days a week of practice" to reach that point, Bromell said. "This is why I talk to kids, and adults, and tell them about the word ‘sacrifice.’ What are you willing to sacrifice to be where you want to be?”

Bromell spends time helping out young kids in disadvantaged neighborhoods. He's a product of a poor family, and memories of his mother working hard to keep the lights on at home fuel much of his passion. He donated $10,000 for kids to use toward college. He awarded the prizes based on essays.

“Some people still in the streets who I know, they look at me and say, ‘Hey Trayvon, you made it out, you're entwined with a blueprint that still gives us hope and makes us see that we can still be in a different light,'” Bromell said. "That's why I take what I do as an athlete so passionately, because there's someone out there that needs to hear this.”

All this might help explain why there isn't much of a show when Bromell is introduced at most track meets — no shadow boxing, or snarling, or playing to the cameras, the way Bolt, and some of the sprinters before his time, might have done.

Bromell has kept the celebrations to a minimum when he wins, too. Bolt announced his presence in Beijing in 2008, when he broke his own world record even though he was celebrating with his arms out to his side before he'd even crossed the line.

It was that sort of showmanship — like the “To Di World” pose he celebrates with by pretending to draw back a bow and arrow — that set the template for the subsequent decade in track and field. Since Bolt retired in 2017, questions remain about who, exactly, can step in and make this sport exciting again.

“Nobody is immediately going to step into Bolt's shoes,” Sebastian Coe, the president of World Athletics, said in an interview this week.

Somebody will, however, step onto the top of the podium — the spot Bolt has owned for the last three Olympics. True to form, Bromell refuses to dwell on the prospect that it might be him.

“I’m never going into a race thinking, ‘Oh, I’ve got it in the bag,'” Bromell said. “I give every athlete their respect because they put in the work as well. But I know the thing that separates me is that I really don't care too much about the limelight.”