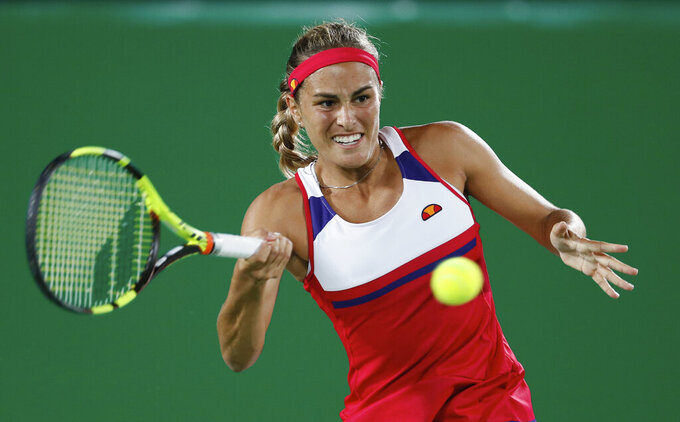 FILE - In this Saturday, Aug. 13, 2016, file photo, Monica Puig, of Puerto Rico, returns to Germany's Angelique Kerber in the gold medal match of the women's tennis competition at the 2016 Summer Olympics in Rio de Janeiro, Brazil. Reigning Olympic tennis gold medalist Puig will miss the Tokyo Games and the rest of the 2021 season after having surgery on her right shoulder. (AP Photo/Vadim Ghirda, File)

Reigning Olympic tennis gold medalist Monica Puig will miss the Tokyo Games and the rest of the season after having surgery on her right shoulder.

Puig, who became the first athlete to win gold for Puerto Rico in any sport at an Olympics with her triumph at the 2016 Rio de Janeiro Games, announced in a video message posted on her Instagram account Sunday that she had a second operation to repair her rotator cuff and biceps tendon.

She said the procedure was “about a week ago.”

“It was with a heavy heart that I took this decision. Obviously my team and I are thinking long term and prolonging my career for as many years as possible and hoping to play in the Paris 2024 Olympics. And that was one of the reasons that led to this decision,” Puig said. “The second reason was obviously that nobody likes to play with pain, and the pain was just too unbearable to spend more than 10 minutes on the court. And that is something that I struggled with as I started my return to the tennis courts.”

The 27-year-old Puig has not competed on tour since a first-round loss at Roland Garros last October against 2012 French Open runner-up Sara Errani. That was Puig’s fourth loss in a row, including a first-round exit at the U.S. Open in September, too.

Puig also had surgery on her right elbow in December 2019.

She was unseeded at the Rio Olympics, but capped a run of upsets by beating three-time Grand Slam champion Angelique Kerber 6-4, 4-6, 6-1 in the singles final. That made Puig the first woman representing Puerto Rico to win an Olympic medal of any color.

Shortly after that triumph, Puig rose to a career-high 27th in the WTA rankings. She is currently 168th.

Puig's best showing at a major tournament was making it to the fourth round of Wimbledon as a teenager in 2013. She's never been past the third round in 27 other Slam appearances.

She said she plans to return to action next year.

“It hasn't been easy on me and my team, as well. ... We’re already looking forward to the next step,” Puig said, “which is the rehab process, which will begin in a couple of weeks.”