British cycling rocked by finding doctor got drug for doping 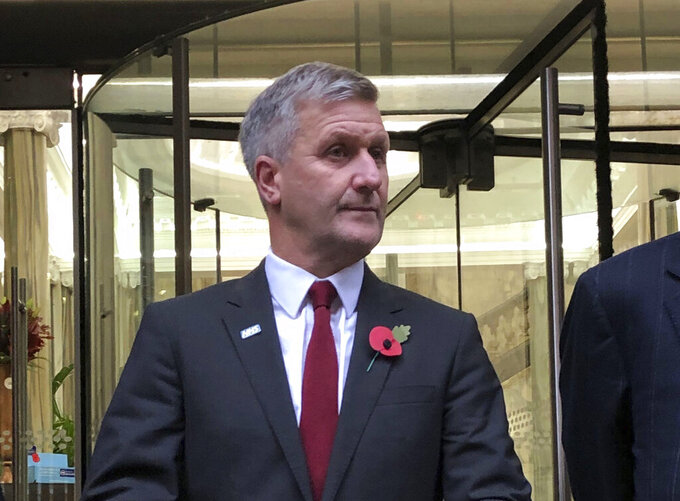 FILE - In this photo dated Nov. 7, 2019, showing Richard Freeman. The former doctor of Team Sky and British Cycling has been found to have covered up an order he placed for testosterone which was intended to help an athlete’s performance, according to a verdict handed down by Britain’s Medical Practicioners Tribunal Service Friday March 12, 2021. (Eleanor Crooks/PA FILE via AP)

MANCHESTER, England (AP) — The reputation of British cycling was dealt a severe blow Friday when a doctor involved in the country's transformation into an Olympic superpower and the Tour de France-winning Team Sky was found to have covered up the order of a “drug of choice” intended to boost a rider's performance.

Dr. Richard Freeman received the guilty verdict from Britain's Medical Practitioners Tribunal Service following a lengthy investigation and hearings lasting two years into the discovery of the 2011 order of 30 sachets of testosterone gel to the Manchester Velodrome.

No athlete was identified by the tribunal, which is set to determine next week whether Freeman can continue to work as a doctor as it considers sanctions. But Freeman has been suspended from working in sports after being charged by the U.K. Anti-Doping Agency with "possession of prohibited substances and/or prohibited methods and tampering or attempted tampering with any part of doping control.”

British Cycling declined to discuss the verdict, only issuing a statement from CEO Brian Facer calling for a time of “sober reflection” and asking for the “highest standards of ethical behavior” from everyone in the sport. Facer gave no indication of concerns about anyone in the organization beyond Freeman.

“The finding that the 2011 delivery of testosterone gel was intended for the illegal enhancement of a rider’s performance is extremely disturbing,” Facer said. “We leave any further action in respect of this to UK Anti-Doping, whose work will have our wholehearted support.”

The 18,300-word MPTS ruling issued in Manchester makes clear both the status of Freeman in sport and the magnitude of his offenses.

“The team doctor for a team of elite cyclists and a member of the anti-doping working group, ordered a doping ‘drug of choice’ for that sport,” the ruling said. “Upon its arrival he was dishonest about why it had been sent, removed it from the Velodrome, and it was never seen again. The tribunal found that Dr. Freeman has been dishonest in its regard ever since."

Freeman had tried to claim the package of the Testogel product was to treat former British Cycling technical director Shane Sutton’s erectile dysfunction, but that was denied by the Australian in testimony to the hearing in 2019.

Freeman admitted to 18 of the 22 MPTS charges, including dishonest conduct by giving untrue information to UKAD, while contesting key charges he has been found guilty of about the purpose of the order to the base for both British Cycling and Team Sky.

“Reflecting upon the totality of the evidence, the tribunal has determined that Dr. Freeman placed the order and obtained the Testogel knowing or believing it was to be administered to an athlete to improve their athletic performance,” the ruling said.

“Bearing in mind the breadth of Dr. Freeman’s dishonesty ... the tribunal found his conduct incapable of innocent explanation,” the ruling added.

Sutton, who resigned from British Cycling in 2016 ahead of the Olympics for allegedly making discriminatory remarks to riders, said he was used as a scapegoat by Freeman.

“It also saddens me that this episode has cast a huge shadow over the success we enjoyed, both at Team Sky and British Cycling,” said Sutton, a former professional cycling who became a renowned coach. “I’d like to stress that neither I nor Sir Dave Brailsford knew about the testosterone order.”

Brailsford, who is renowned for his "marginal gains" mantra, helped to establish Team Sky in 2009 and he also held the role of performance director of British Cycling until 2014.

“The team does not believe that any athlete ever used or sought to use Testogel or any other performance-enhancing substance," Ineos said in a statement.