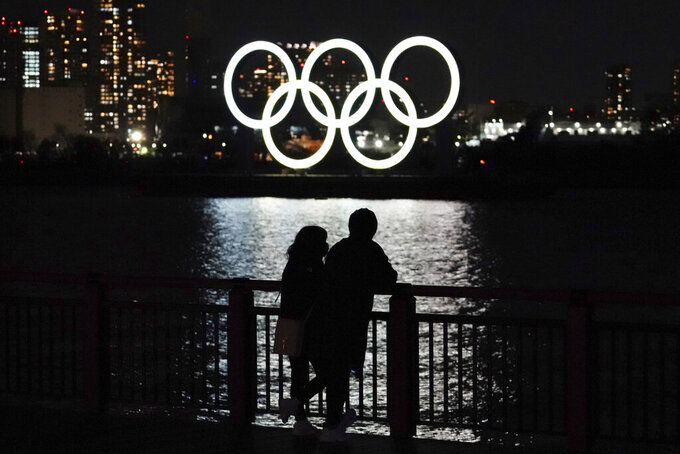 A man and a woman stand with the backdrop of the Olympic rings floating in the water in the Odaiba section in Tokyo, Wednesday, March 3, 2021. (AP Photo/Eugene Hoshiko)

GENEVA (AP) — Russia's wish to use a patriotic Soviet-era folk song as a replacement anthem for the Tokyo Olympics was rejected by the Court of Arbitration for Sport on Friday in further fallout from a years-long doping scandal.

The court said its panel of three judges was asked to clarify what music it would allow within the two-year ban on Russia's team name, flag and national anthem from Olympics and world championships imposed in December.

Russian officials proposed the “Katyusha” song, which is strongly identified with the fight against Nazi Germany in World War II.

“The CAS panel considers that ‘any anthem linked to Russia’ extends to any song associated with, or with links to, Russia, which would include Katyusha,” the court said in a statement to The Associated Press.

It is unclear which piece of music Russian Olympic officials could propose in consultation with the International Olympic Committee.

Russia will compete in Tokyo and next year's Winter Olympics in Beijing as “ROC,” an acronym for the Russian Olympic Committee.

The CAS judges' ruling in December settled Russia's long-running dispute with the World Anti-Doping Agency over a state-backed doping program and cover-ups.

The IOC asked the Russian Olympic body last month to submit an alternative piece of music for use at medal ceremonies.

Similar restrictions apply to world championship events in Olympic sports, and most governing bodies have played their own anthems for Russian athletes and teams.

A piece of music by 19th-century Russian composer Pyotr Tchaikovsky was approved by the International Skating Union for its world championships.