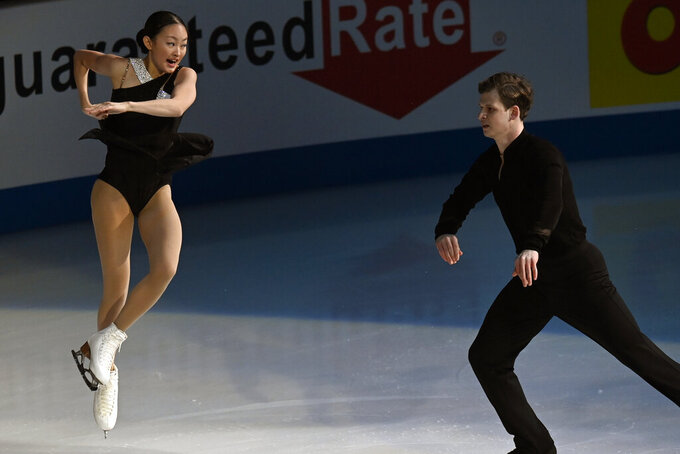 Kamila Valieva began her run-up to the Beijing Olympics by heading to the lower-level Finlandia Trophy in early October, where the 15-year-old Russian superstar broke the world record for the free skate and total score.

She continued it three weeks later by breaking those new marks at Skate Canada.

And lest anyone think that was enough, Valieva completed her Grand Prix season by not only topping her records in the free skate and total program at the Rostelecom Cup in November but also setting a record in the short program. The queen of the quadruple jump finished with 272.71 points, a total better than all but four men in the world this year.

Not so hard to peg her as the overwhelming favorite to take home Olympic gold next month.

“I just try to do my best. Our entire team works for the result and the rest does not depend on us,” Valieva, who also claimed the latest national championship, told the Russian sport magazine “Champions” in a recent interview.

In fact, Valieva's biggest challenge in Beijing could come from her very own team.

Known as “The Jumping Fairy,” 17-year-old Alexandra Trusova was the first women's skater to land the quad lutz, toeloop and flip in international competition. She was slowed by a leg injury last year but still won Skate America, where she beat Kaori Sakamoto of Japan — one of the few that can challenge Russian dominance — by more than 15 points.

“I have always, since I was a little girl, wanted to do something that no one else does,” Trusova told Russian media. “If that means everyone after me learns to do quads, then I will do (quintuple jumps).”

The third member of the Russian contingent, 17-year-old Anya Shcherbakova, is merely the reigning world champion.

All three of the Russian skaters work under the watchful eye of Eteri Tutberidze at the Sambo 70 skating club in Moscow, where she tutored reigning Olympic gold medalist Alina Zagitova and silver medalist Evgenia Medvedeva.

“I mean, it's absolutely incredible what they're doing, especially their technical elements," said American skater Karen Chen, who will be competing her in second Olympics. “It's no question how amazing it is for someone to be doing that many quads and triple axels and things like that. What they're doing is incredible.”

Chen will be joined in Beijing by newly crowned U.S. champion Mariah Bell and 16-year-old Alysa Liu, who withdrew from nationals due to COVID-19 but whose jumping ability makes her one of the few skaters to rival the Russians.

Yuzuru Hanyu has been working for years on the quadruple axel, the 4 1/2-rotation jump that nobody has been able to land in competition. And it could hold the key to beating U.S. skater Nathan Chen and winning a third straight gold medal.

At their best, Hanyu and Chen are a cut above the rest. But the Japanese have two other contenders in Yuma Kagiyama, who won his Grand Prix assignments at Grand Premio d' Italia and Internationaux de France, and Shoma Uno, the Olympic silver medalist who won the NHK Trophy and finished second at Skate America.

Who beat Uno there? Vincent Zhou, the American who's battled inconsistency but can jump as well as anyone.

Aljona Savchenko and Bruno Massot broke up the Russian and Chinese dominance of pairs at the Pyeongchang Games by delivering gold for Germany. But expect one of those two powerhouses to regain the top step of the podium in Beijing.

The Russian team of Evgenia Tarasova and Vladimir Morozov have been nearly unbeatable, as have their teammates and rivals Anastasia Mishina and Aleksandr Galliamov. The Chinese team of Sui Wenjing and Han Cong won both of their Grand Prix assignments and will try to improve on their silver from Pyeongchang.

Gabriella Papadakis and Guillaume Cizeron of France are the ice dance favorites in Beijing after narrowly — and somewhat controversially — losing the gold medal to Canada's Tessa Virtue and Scott Moir four years ago.

Papadakis and Cizeron are not an overwhelming pick, though, because dance is perhaps the most wide-open discipline at the Beijing Games. Piper Gilles and Scott Poirier of Canada won their home Grand Prix and were second to the French team at Internationaux de France, while Russia's Victoria Sinitsina and Nikita Katsalapov are the world champions.

Then there are the American teams: Madison Hubbell and Zachary Donohue, Madison Chock and Evan Bates, and Kaitlin Hawayak and Jean-Luc Baker. All of them have the ability to land on the podium in Beijing.

The question is not whether the Russians will win gold but by how much, and which country — perhaps Canada and the U.S. — will join them on the podium. If nothing else, the team competition that begins the Olympic figure skating competition can give fans a glimpse of the favorites for the other events the rest of the program.