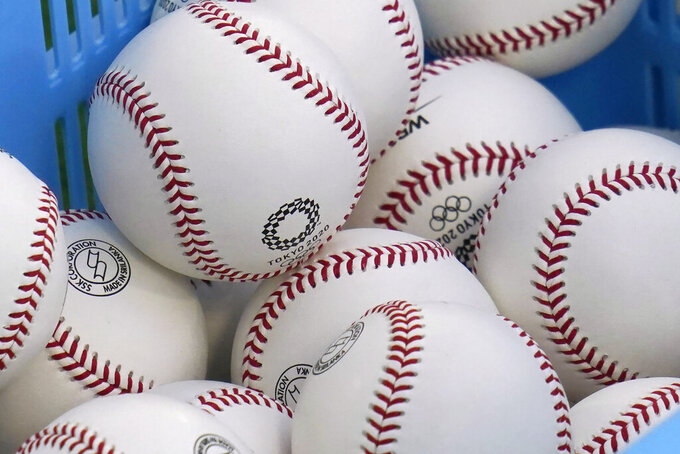 A basket of baseball is pictured before a baseball game between Israel and the United States at the 2020 Summer Olympics, Friday, July 30, 2021, in Yokohama, Japan. (AP Photo/Sue Ogrocki)

YOKOHAMA, Japan (AP) — Joe Ryan thinks the world of the baseball being used at the Olympics.

So much so, he prefers the model from Osaka-based SSK to the Rawlings minor league baseballs manufactured in China.

“Since we got back from the qualifier, I brought as many as I could back and showed everyone, It is the best ball in the world,” the American said after pitching six innings to beat Israel on Friday night.

“They need this ball over America. It is amazing. It’s perfect. And the hitters love it. I love throwing with it. All the pitchers love throwing with it. SSK did an outstanding job creating this. So we need this ball. I think it would solve a lot of the current issues that with foreign substances that people like to talk about. It is, I can’t say enough, the best baseball I’ve ever touched.”

Ryan, a 25-year-old right-hander, was acquired by Minnesota last week from Tampa Bay in the trade that sent slugger Nelson Cruz to the Rays.

“It's pre-tacked,” he said. "The ball in America is similar to a cue ball. It’s inconsistent in size. There’s a lot of issues. This ball is consistent. You don’t need any substances whatsoever. You don't even need rosin. I only use rosin now, and with this ball I barely touch the rosin bag.

“So it’s amazing. It fits in your hand a little bit easier. It has some seams, so you can get some grip there. Again, I think it works for both parties. The hitters — I haven’t heard anything from the hitters. I've asked about seeing a difference in the flight characteristics, but it seems to be the same. It's packaged in a nice little wrapper, and it's got the tack that they put on before, so when you open that thing up it's ready to rock and roll."

MLB owns a minority stake in Rawlings, and Peter Seidler, the San Diego Padres general partner, has chief oversight of the equity firm that owns a majority share.

MLB started a crackdown on the use of foreign substances on June 21, when umpires began checking all pitchers.