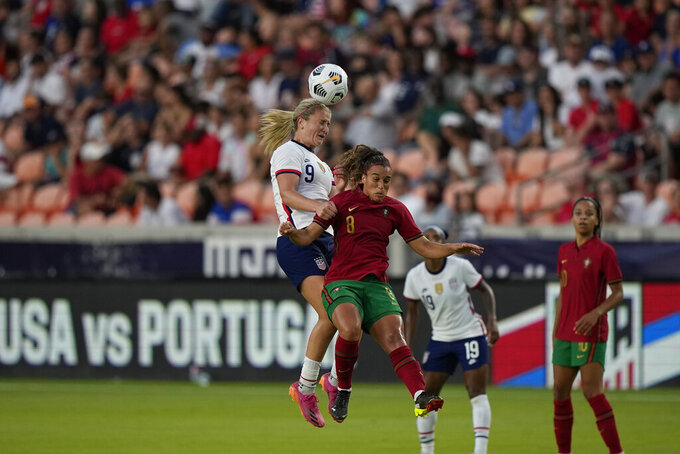 United States' Lindsey Horan (9) and Portugal's Andreia Norton (8) go up for a header during the first half of an international friendly soccer match Thursday, June 10, 2021, in Houston. (AP Photo/David J. Phillip)

HOUSTON (AP) — Sam Mewis scored in the 76th minute and the U.S. national team beat Portugal 1-0 in the Summer Series on Thursday night.

The U.S. women are undefeated in 40 straight matches, the third longest streak in team history. The team is undefeated in 54 games on American soil.

The Americans are using their three exhibition matches in the Summer Series to help prepare for Tokyo Olympics.

“We've faced all different types of opponents in preparation for this Olympics and I think the style of play that we went up against tonight is something we absolutely could see,” Christen Press said. “I think also just going into the half scoreless and having to push for a goal, it starts to feel as you get closer to the Olympics that these are the types of experiences that we really want to have and want to succeed in."

The starting lineup Thursday included nine players who started in the World Cup final. Julie Ertz and Tobin Heath were not available because of injury.

The Americans were surprisingly scoreless until Mewis broke through with her header. It was her 22nd international goal.

“I definitely think we have higher expectations. I personally didn't really get enough of my shots on target," Mewis said. "I think all of us know that we can be a little bit more clinical in and around the box, and just with our decisions in the final third and executing those shots or chances on goal.”

Press served Mewis the ball on a corner for her 40th assist, becoming the 14th U.S. player with 100 combined goals and assists for her career

Carli Lloyd appeared to score a short time later on a rebound off a free kick but it was ruled offside.

Ines Pereira made nine saves in goal for Portugal.

“It was a good test for us,” U.S. coach Vlatko Andonovski said. “I felt like we created enough opportunities to score more than one goal. Two things were good: One, that we were disciplined enough and didn't give absolutely anything away, which is very positive because in games like this we know how they can end up. And the second positive thing is that once again we found a way."

The United States has faced Portugal nine previous times, winning all of the meetings.

Jamaica won the opening match of the Summer Series, 1-0 over Nigeria earlier Thursday.

The United States plays Jamaica on Sunday, following a match between Nigeria and Portugal.