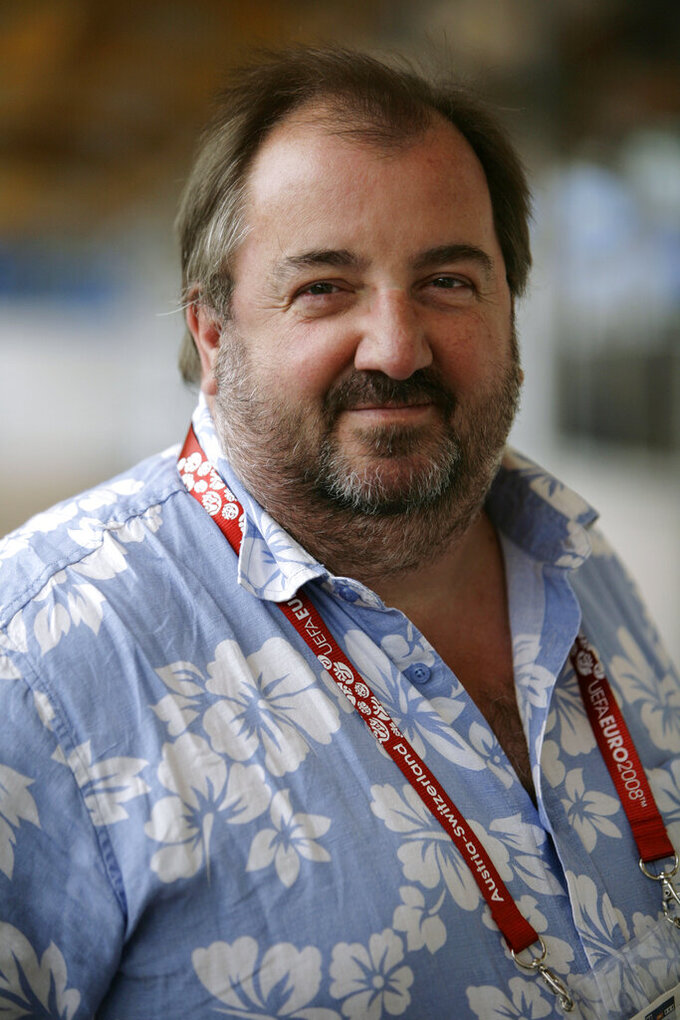 This 2008 file photo shows Simon Haydon, former Associated Press international sports editor. Haydon, who shaped The Associated Press’ coverage of World Cups and Olympics as international sports editor and reported on landmark news events while traveling the world as a correspondent, including the downfall of Romanian dictator Nicolae Ceausescu, died early Tuesday, Nov. 24, 2020 in a hospice in southern England, according to his wife Barbara. (AP Photo, File)

LONDON (AP) — Simon Haydon, who shaped The Associated Press’ coverage of World Cups and Olympics as international sports editor and reported on landmark news events while traveling the world as a correspondent, including the downfall of Romanian dictator Nicolae Ceausescu, has died. He was 64.

Haydon had recently been diagnosed with cancer and contracted the coronavirus last week. He died early Tuesday in a hospice in southern England, according to his wife, Barbara.

Haydon left the AP in 2018 after a decade based in London overseeing global sports coverage, retiring to further his recovery from a heart attack and to pursue interests outside journalism.

“Simon never forgot that covering sports is supposed to be fun. He was at his happiest at global tournaments and big events, always willing to help on whatever was needed,” said Michael Giarrusso, the AP’s global sports editor. “He could conduct interviews in several different languages, and he had a deep knowledge of European football history and cricket.”

Despite stepping back from journalism after four decades, Haydon did not lose touch with writing or sports -- particularly soccer, or football as he pushed for the American-based AP to call the world’s most popular sport.

Through his “Fat Ref” blog, Haydon — who would joke about his girth -- used his experience as an amateur referee to analyze calls by officials in the world’s biggest matches.

“While I’ve never been a good footballer, I’ve had a lot to do with football,” he wrote. “My four sons have all played football at varying levels and I became a referee after shouting at a referee in Kent one day and receiving a dressing down from him.”

“As an amateur referee, he was one of the few journalists who consistently advocated for the officials,” Giarrusso said. “Whenever a referee is criticized, I’ll think of Simon and imagine that he would have a good excuse for that mistake.”

Haydon began his journalism career on local newspapers in eastern England after graduating from the University of East Anglia with a bachelor’s degree in European literature.

After three years, he joined the editing desk of Reuters, where he went on to serve as a correspondent and bureau chief in London, Oslo, Paris and New Zealand and in Nordic and Baltic countries.

In December 1989, he helped to break the news in Romania of the execution of the Communist dictator Ceausescu.

He was one of the first journalists to visit Ceausescu’s 40-room mansion, which he said was “dripping with gold and silver and packed with art treasures while his nation starved. Even his nuclear bunker was lined with marble.”

Haydon first joined the AP as part of its Europe and Africa desk in London in 2005 and helped cover the 2006 World Cup. He left to become editor of a real estate financial newsletter but returned in 2008, tasked with expanding AP’s coverage of major sports outside the United States and preparing for the 2012 Olympics in London.

He oversaw journalists in dozens of countries and advanced enterprise reporting, including acclaimed investigations into match-fixing in international football, worker abuses in 2022 World Cup host nation Qatar and doping scandals among Kenyan athletes.

He saw the power of social media in advancing the reach of the AP’s journalism, encouraging reporters to join Twitter in its early development.

He worked with journalists to liven up football coverage, away from often formulaic news agency writing.

“The mark of a good journalist is finding something fresh to say time and time again,” he wrote in 2010.

The most wide-ranging of tasks was configuring football coverage of World Cups, Confederations Cups, European Championships, gathering preview packages and assigning reporters to fly in to cover every team.

“Like all the best sports journalists, Simon had a real love and feel for his subject matter,” said Tony Hicks, the AP’s deputy director of photography (international). “That said, Simon was not a one-dimensional sports enthusiast. He was well traveled, well educated, a bon vivant, a raconteur and a pleasure to spend time when we got those fleeting moments to unwind in the middle of many hectic assignments.”

After a career spent writing and editing text, leaving the AP provided him a chance to hone his passion for photography.

In addition to his wife, he is survived by sons Harry, Jack, Tom and Will

“In his last years at AP and after he retired, it was good to see Simon reach a healthy work-life balance — exercising, eating right, reducing stress and spending more time with his family and pets,” Giarrusso said. “In our chats and emails after he retired, he seemed relaxed, happy and excited about a book he was working on. It was energizing to talk to him.”