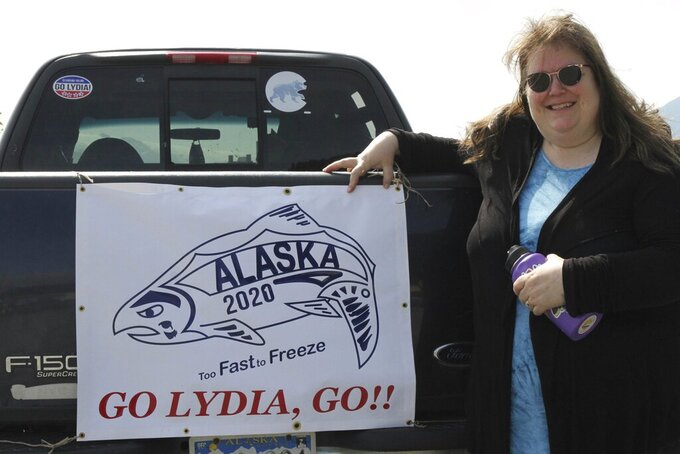 Sarah Spanos displays signs of support for Olympic swimmer Lydia Jacoby adorning her pickup truck, in Seward, Alaska, Tuesday, July 27, 2021. Jacoby, a 17-year-old from Seward, scored a major upset when the first Alaskan ever on the U.S. Olympics swimming team won the gold medal in the 100-meter breaststroke at the Tokyo Games. (AP Photo/Mark Thiessen)

SEWARD, Alaska (AP) — An Olympic buzz permeates an Alaska coastal community thousands of miles away from Japan and nearly a full day after Lydia Jacoby scored a major upset to bring home gold in the women’s 100-meter breaststroke at the Tokyo Games.

Jacoby, a 17-year-old who will return for her senior year of high school in Seward, was the first Alaskan to ever qualify for the Olympics in swimming.

“We were hoping for a medal, but for her to hit the wall first was just beyond any of our expectations," said Sarah Spanos, a swim mom who volunteers with the small team that Jacoby belongs to, the Seward Tsunami Swim Club. “And just everybody’s beaming with pride and joy and just tears, lot of tears.”

When Jacoby was declared the winner, the room erupted with cheers, whoops and hollers except for Spanos.

“And at that point, my tears just started, and I was just ugly crying for the next 20 minutes,” she said of being so overcome with pride.

The watch parties grew in size as the games progressed. About 60 people showed up earlier in the week for Jacoby’s first race, even though it was shown at about 2:30 a.m. Alaska time. It grew even larger for the semifinals.

Allon Lefever of Lancaster, Pennsylvania, brought a grandson to Alaska for a special trip, and happened to be in an ice cream parlor when Jacoby won the gold. He wasn’t watching and couldn’t figure out why people were clapping, shouting, and hanging out the windows of cars that were driving by in Seward, a community of about 2,700 people where downtown streets are named after the nation’s first presidents.

“Then somebody at the next table said, ‘Hey, Lydia just won a gold.’ Then somebody else says, ‘No, that’s impossible.’ ‘Yeah, yeah, yeah.’ And the place went wild. It was so cool,” said Lefever after stopping to take photos of the “Good Luck” signs that were placed along the roadway.

Many businesses support Jacoby by placing signs in their windows, on marquees or in Tammy Nicolas’ case, on her T-Shirt. It was emblazoned with the slogan, “Go Lydia Go” and featured an Alaska Native design of a fish with the phrase, “Too Fast to Freeze.”

"She’s been working super-duper hard to make it to the Olympics, and we’re super proud of her,” said Nicolas, an office manager at a gravel extraction and concrete supply company.

“It’s amazing that she’s able to push hard and that she has the support of this community to push her through,” she said.

Clay Peterson just graduated from Seward High School, where he was a year ahead of Jacoby. They were in the play “You’re a Good Man, Charlie Brown” a few years ago.

“Right before COVID hit, we were all in the school and it was some trial to go to the Olympic trials, and we had the whole school watching on this tiny little TV and we all went crazy,” he said.

“That was just then and now she’s in the Olympics, and then won gold, like, that’s … it’s insane. It’s hard to grasp for anybody here,” he said.

Jacoby benefitted by the Olympics being a year late because of the COVID-19 pandemic, said Solomon D’Amico, one of her co-coaches with the swim club.

“With this extra year, you get a whole other year to get stronger and get faster, get your technique that much quicker. She took the ball and ran with it,” he said. “She really made sure she got the most out of that extra year.”

D’Amico and other coaches also attended the watch party, and he said he was not nervous, nothing compared to being on pool deck with her during the Olympic Trials in Omaha, Nebraska. Instead, he was excited and hopeful.

“I wouldn’t say I was expecting a gold medal, but I was expecting her to kind of shock the world,” D’Amico said, especially since she was flying under the radar of a lot of media.

He called Jacoby an amazing person with a great work ethic and sweet temperament.

“What happened last night couldn’t happen to a nicer kid,” he said.