In some Olympic sports, training from home is almost routine 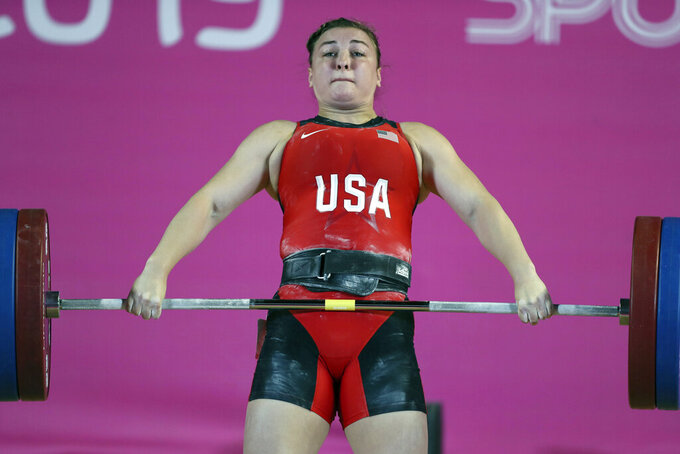 FILE - In this July 29, 2019, file photo, Katherine Nye of the United States competes in women's snatch 76 kg weightlifting at the Pan American Games in Lima, Peru. The coronavirus crisis has forced many athletes to be creative as they try to continue their training, but in some Olympic sports, working from home is fairly routine. Nye trains in her garage. (AP Photo/Fernando Llano, File) 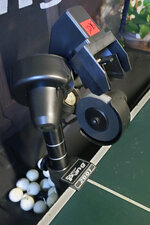 Less than a month after Nikhil Kumar qualified for the Olympics in table tennis, the Tokyo Games were postponed until 2021. Like so many other athletes, he is now trying to stay sharp and in shape.

What’s different for Kumar are the logistics. All things considered, his situation is pretty manageable.

“For my sport, a little lucky that we’re able to have everything indoors, and it’s not taking up too much space and everything,” Kumar said. “Not many sports are as lucky as ours is right now, to be able to have the opportunity to continue playing on a daily basis.”

The coronavirus crisis has forced many athletes to be creative as they try to continue their training, but in some Olympic sports, working from home is fairly routine. Kumar has been able to practice with a robot that shoots balls at him. Weightlifter Kate Nye trains in her garage. Everyone is facing challenges during this pandemic, but some competitors have been fortunate.

“When everything kind of started shutting down, it obviously affected our lives in other ways — but weightlifting wasn’t one of them,” Nye said. “I’ve kind of just been going as scheduled.”

The virus has forced some athletes to come up with unusual solutions. Sandi Morris and her father built a pole vault setup for her near her parents’ place. In India, swimmer SP Likith has reportedly been training in an irrigation tank at a farm. Javelin thrower Kara Winger tries to simulate that event by throwing a metal pipe along an angled cable in her yard.

Compared to all that, Kumar’s challenge is pretty mundane. He recently upgraded his device that shoots table tennis balls at him in rapid succession.

“With this new one, I’m able to give different spin, like every single ball, and keep alternating,” he said. “It’s just more advanced.”

He also does some weight training and running on the treadmill. The biggest concern at this point is probably the mental grind.

“It’s just a different experience. But now, once I got the hang of it, the practice is going well,” said Kumar, who is from California. “But it’s also hard to have to mentally want to push myself, every single day, to come and practice, because it’s a little different feeling than if you were to practice with a person.”

Nye had actually set up her garage gym before the virus really became an issue. Mattie Rogers, another American weightlifter, would normally train at a gym, but she had to shift to her garage as well.

“I kind of like it, honestly, now, because I don’t have to drive,” Rogers said. “My gym is about 40 minutes away, so if I’m doing two training sessions a day, driving there and back that many times, I’m saving a ton of time now.”

Rogers did have to make adjustments. The floor in her garage isn’t level, so she tried to fix that using a living room rug. There have also been neighbor complaints about weights hitting the ground.

“We got these mats, so like every time that I drop the bar, I have to walk forward and drop it on the mats,” she said.

Rogers spent a dozen years as a gymnast and she knows how much harder it would be to train from home if she were trying to reach the Olympics in, say, the vault.

“It would be almost impossible. You could do some things to stay in shape, but you can’t do normal training from home,” she said. “There are a lot of weightlifters that regularly train in their garage. I think we’re unique in that aspect.”

For air rifle shooter Lucas Kozeniesky, the basement is where he's been able to set up. There is enough room for him to practice at his home in Colorado — at the Olympic length of 10 meters.

“I opened up a couple doors, and like a hallway connected, and I'm like, ‘Oh look, this is actually perfect,’” he said.

The logistics of training these days can vary widely within a sport.

American cyclist Chloe Dygert is favored to win two gold medals at the Tokyo Games, one in the time trial on the road and one with her pursuit team on the track. She recently moved to Idaho to be near her coach, and she says not a whole lot has changed for her because she can still do individual training rides or ride indoors on a stationary bike.

A BMX track, on the other hand, has jumps and ramps that aren't easy to simulate at home.

“I do have an elite training site with minimal riders accessing the facilities and hopefully those will open soon,” American BMX racer Alise Post said recently.

For Nye, the training has been simple — although that certainly doesn’t mean things are normal right now. She’s a student at Oakland University who wants to go to medical school. The postponement of the Olympics has created a lot of uncertainty in her life outside of sports.

The weightlifting, though, she can keep up with.

“I’ve had it pretty easy. My life hasn’t changed a whole lot. School went online, and I’m working at my garage as usual,” Nye said. “What is my future going to look like, emotionally? That’s hard, but everyone’s dealing with that on some level.”