For some on track, Olympic moment means more than fast times 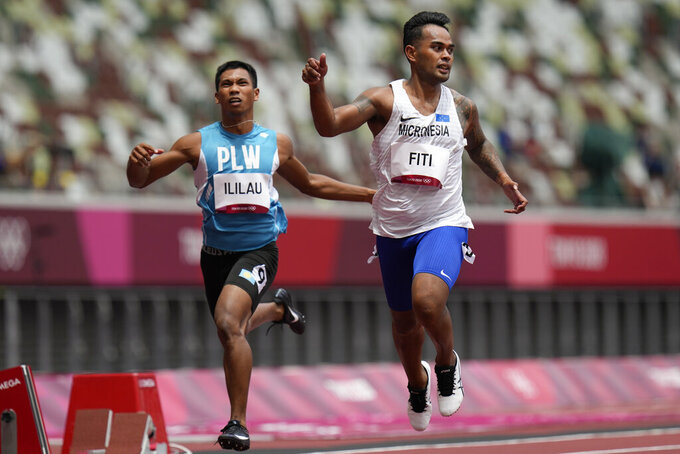 Adrian Ililau, of Palau, and Scott Fiti, of Federated States of Micronesia, compete in a heat in the men's 100-meter run at the 2020 Summer Olympics, Saturday, July 31, 2021, in Tokyo. (AP Photo/Petr David Josek)

Simply racing down the track in the preliminary round of the men's 100 meters — the round before “Round 1” — meant everything to the 26-year-old runner from Micronesia.

Fiti is one of dozens of athletes across several sports who made it to Tokyo thanks to the IOC's “universality quota places,” which helps ensure that each of the 206 national Olympic committees has at least one spot at the Games.

So, while Fiti might be ranked 4,791st in the world, for a few seconds he was the center of attention — lining up on the same track that Trayvon Bromell and Andre De Grasse will be on when they go for gold.

“I was just happy to be here,” Fiti said. “My very first experience. My very first run at the Olympics. This was fun.”

The same went for Nathan Crumpton, a 35-year-old sprinter representing American Samoa. These days, he's more accustomed to taking 15-to-17 steps, not triple that amount down the track. He also trains for the winter sport of skeleton and very much could be competing again at the 2022 Beijing Games (he represented Team USA for years in the event before joining the American Samoa's squad for the 2019-20 season ).

“All in all, this is a great time,” said Crumpton, who was born in Kenya, ran track at Princeton University and now spends his time training between Hawaii, Utah and Austria. “At the end of the day, I’m here to participate. Most people aren't going home with medals. I’m just honored and thrilled to be here.”

For some, the unique experience was filled with heartbreak. Take Aveni Miguel of Angola, who was so anxious to fly down the track that he false started.

He was disqualified and didn't get to run.

The fastest 10 sprinters advanced out of the preliminary round and into the main draw of 63 runners for Round 1. Barakat Mubarak Al-Harthi of Oman went a season-best 10.27 seconds. His reward? A first-round heat that includes Fred Kerley of the United States and Divine Oduduru of Nigeria, who are among the world's fastest this season.

Dorian Keletela, who represents the Refugee Olympic Team, is moving on as well. The refugee team was created by the IOC for the 2016 Rio de Janeiro Olympics to allow athletes to keep competing even if they have been forced to leave their home countries. The team consists of 29 athletes spread out over 12 sports.

“No matter how many difficulties you face you have to believe in what you do. When you believe in it, you can do it anything, whether you are a refugee or not.”