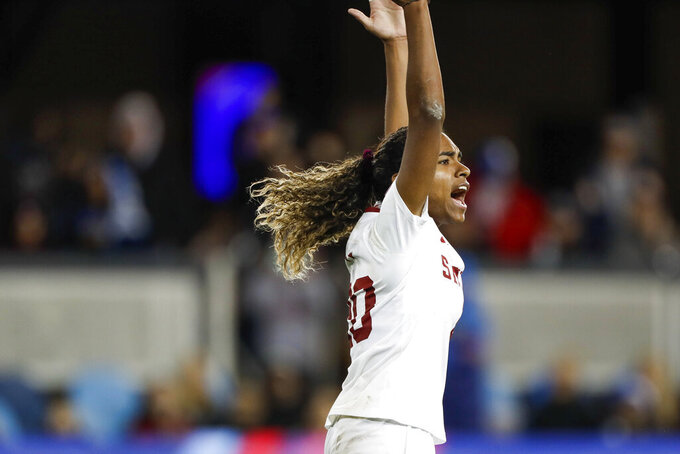 FILE - In this Dec. 8, 2019, file photo, Stanford's Catarina Macario celebrates after scoring a penalty kick against North Carolina during a soccer match in San Jose, Calif. Macario, a promising prospect for the U.S. women's national team, has announced that she will forgo her senior season for a professional career. (Randy Vazquez/Bay Area News Group via AP, File)

The seven-time European champion said Tuesday that Macario, who joined from Stanford University, signed a 2 1/2-year deal until June 2023.

The Brazilian-born midfielder announced last week she would skip her senior season and pursue a professional career. On a conference call with reporters Tuesday, Macario said she reached the decision to go pro after consulting with family. She said the uncertainty caused by COVID-19 restrictions also played a part.

“I just wanted to have consistent playing, especially ahead of the Olympics. And so I am fresh out of college and I’m just looking for a new adventure. I think the best thing for me is just to experience a new culture and just learn from the best in the world,” Macario said.

Macario became a U.S. citizen in October but she hasn’t received approval yet from FIFA, soccer’s international governing body, to play for the U.S. national team.

The two-time winner of the MAC Hermann Trophy as the nation’s best college player, Macario had a Stanford single-season record of 32 goals and 23 assists last season. She was called up to her first national-team camp the same day she became a citizen.

Macario said she hopes to someday play for the National Women's Soccer League in the United States.

"I’m not sure necessarily when, but obviously as an American it is my dream to play where I reside and so I will definitely be coming back,” she said.

Macario is the 11th American player to join Lyon.

“I know that in Lyon I’ll have all the facilities, all the resources that I can get in order to become the best player that I can be, and I think spending two and a half years there will really take me to the next level, I’m hoping," she said.