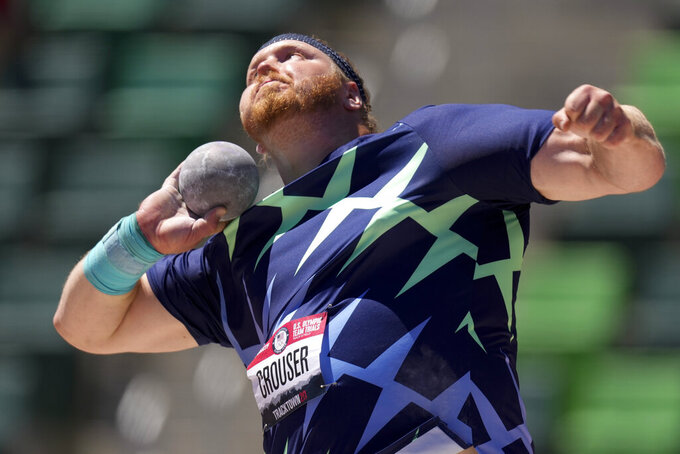 FILE - In this June 18, 2021, file photo, Ryan Crouser competes during the prelims of men's shot put at the U.S. Olympic Track and Field Trials in Eugene, Ore. A simple question of describing their track and field craft led to some creative comparisons that might help the casual track fan better understand precisely what they do at the Tokyo Games. Shot put world record holder Crouser summarized what he does for a living with an illustration. He said his event was the equivalent of picking up the heaviest bowling ball and trying to throw it the length of a basketball court. (AP Photo/Charlie Riedel, File)

TOKYO (AP) — Imagine picking up the heaviest bowling ball on the rack and tossing it nearly the length of a basketball floor. That, world-record holder Ryan Crouser explains, is what it feels like with the shot put.

Leaping into a soft pile of sand? That's the essence of long jumping, according to Tara Davis.

A simple question to describe one's craft led to some creative comparisons that might help the oh-so-occasional track fan — the one tuning in just for the Tokyo Olympics — to better understand precisely what they're watching.

Crouser went with a visual approach to encapsulate what it was like to set his world record at the U.S. Olympic trials last month in Eugene, Oregon. To grasp the difficulty and the distance of his mark of 76 feet, 8 1/4 inches (23.37 meters), head down to the local bowling alley and grab a 16-pound ball (7.3 kilograms). Then, find an open basketball court, stand at the free throw line, turn around and throw it toward the basket at the other end.

Even that's not quite his world-record distance. But it would get someone close to a medal at the 2019 world championships in Doha.

“We’re strong and we move well and we’re generating a ton of force,” said the 28-year-old Crouser, who broke a 31-year-old record at trials. “It’s hard enough to make a three-quarter court shot, just to throw a basketball that far — now throw a bowling ball that far. That puts it in perspective.”

In the pole vault, Sam Kendricks wanted it known it's not about how high someone can go. Well, it is but it's also more of a high-stakes poker game.

See, at big competitions, it's about the misses, too. At the 2016 Rio de Janeiro Games, Katerina Stefanidi of Greece and Sandi Morris of the United States both cleared 5-11 (4.85 meters) but Stefanidi won gold with fewer misses.

“You’re never quite sure what hand the other guy is going to have to play. How fit is he that day. What poles is he jumping on," said Kendricks, the bronze medalist in Rio. "Because when you go into something like the Olympics, it’s different. The expectations are different. You realize there’s only really true reward after you’ve already gained that title of Olympian and that's if you get a medal. Some guys will take risks when otherwise they might not have.”

That all applies to the high jump as well, only, "without the (pole vault) stick,” rising standout JuVaughn Harrison cracked. The only real confusion may be the conversions from feet to meters.

Harrison's advice: “Google the meter conversion and look at the feet and how high it is and that should put into perspective how high we’re actually jumping and getting our bodies over the bar.”

He's also among the favorites in the long jump.

“I don’t even know how to explain it,” said Harrison, who won both the high and long jumps at trials. "You run down and jump into the sand.”

That explanation works for Davis, the NCAA long jump champion from the University of Texas who finished second at trials.

“Run down the runway and throw yourself into a pile of sand,” she said.

Almost a day at the beach sort of deal for Davis.

“Just going to go out there and have fun,” she said.

Then, there’s the hurdles, which world-record holder Keni Harrison described as a mixture of speed, technique, rhythm and, most important, clearance.

“We’re jumping over 33 inches, which is probably like a small toddler,” Harrison said.

Triple jumper Will Claye felt for every first-time Olympian who didn’t have the chance to walk in Friday's opening ceremony. He remembers meeting NBA players LeBron James and the late Kobe Bryant when he took part at the 2012 London Games.

“Those are the memories that last a lifetime,” said Claye, who's earned back-to-back Olympic silver medals in the triple jump. “For someone who this may be their first Olympics, it's a once-in-a-lifetime thing. You never know if you get back to that stage. It's unfortunate. That’s something everyone should do at least once."

Middle-distance runner Clayton Murphy didn’t quite understand why some athletes got the choice and some didn't. He posted on his Twitter account: “Pretty disappointing to see other Team USA athletes, and track athletes from other countries enjoying and having the honor to walk in opening ceremonies. While I’m at home and was told we were not allowed to go early for opening ceremonies.”