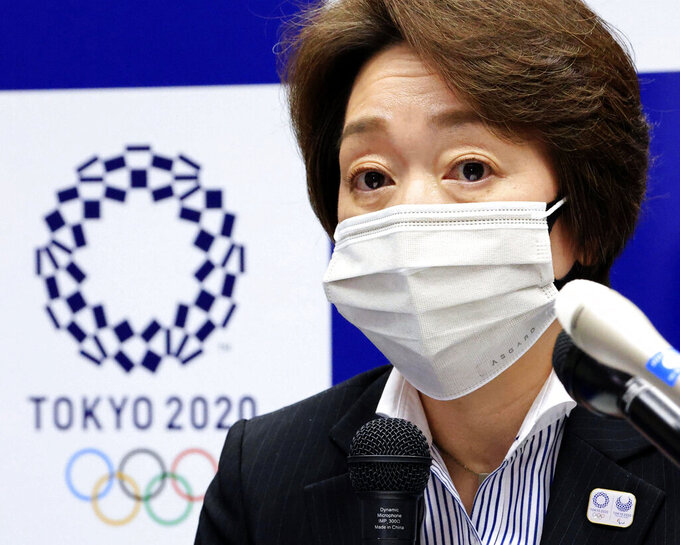 Seiko Hashimoto, president of the Tokyo 2020 Organizing Committee, speaks during a press conference Friday, May 7, 2021 in Tokyo, Japan. Hashimoto said Friday that a planned visit to Japan this month by IOC President Thomas Bach seemed unlikely with a state of emergency order being extended by the government to Tokyo and other areas until May 31.(Kyodo News via AP)

TOKYO (AP) — The president of the Tokyo Olympic organizing committee said Friday that a visit to Japan this month by IOC President Thomas Bach seemed unlikely with a state of emergency order being extended by the government to Tokyo and other areas until May 31.

Canceling the trip could be embarrassing for the International Olympic Committee and local organizers who say they can hold a “safe and secure” Olympics in the middle of a pandemic as cases surge in Japan — particularly in Tokyo and Japan's second metropolis of Osaka.

The postponed Olympics are to open in only 11 weeks, on July 23, followed by the Paralympics on Aug. 24. They will involve 15,000 athletes and tens of thousands of others entering Japan, which has reported about 10,500 deaths from COVID-19.

“Frankly speaking, I personally think it would be quite tough for him to come now,” organizing committee president Seiko Hashimoto said at a weekly briefing, adding that “nothing had been decided.”

“But the extension of the state of emergency and having him visit during that time will mean that president Bach will be visiting in a quite a difficult time,” Hashimoto said. “I think that would be a very difficult thing for him.”

Bach said recently he hoped to go to Hiroshima to meet the torch relay — and presumably to Tokyo — on May 17 and 18. But he has said his plans were not finalized.

Coincidentally, powerful IOC member Sebastian Coe is in Tokyo for a track and field test event on Sunday at the new $1.4 billion national stadium.

Coe is the president of World Athletics, the governing body of track and field, and was also the head of the 2012 London Olympics. He is seen as a potential successor to Bach when the German's term ends in 2025, and is also a two-time Olympic gold medalist in the 1,500 meters.

Coe has been laudatory about a half marathon test event run earlier this week in Sapporo. He's also sympathetic with Hashimoto trying to pull off the Olympics.

“I know the pressure that you are under,” Coe said to Hashimoto. "But mercifully in London, we didn't have the added complexity of worrying about protocols around a pandemic. So you have our sympathy in that extra tier of complexity.”

Coe also met with Tokyo Governor Yuriko Koike as both try to assure that the Olympics will be safe. Some scientists have suggested otherwise, and an editorial last month in the British Medical Journal said the Olympics should be “reconsidered.”

Tokyo organizers are talking up a six-day diving test event that ended Friday. There was only one positive COVID-19 test among 438 participants — including 224 divers from 46 countries and territories. The positive test was for a team official, who was placed in quarantine, officials said.

“Feedback from the competitors has been very positive,” the organizing committee and FINA, the governing body of swimming and diving, said in a statement.

The statement quoted Canadian diver Jennifer Abel saying: “The main goal for everyone is to be and feel safe, and we are very safe here. We cannot ask for better conditions with the COVID situation.”

Hashimoto said a donation by vaccine developers Pfizer and BioNTech to inoculate athletes and officials preparing for Tokyo would make the games safer. The agreement was announced Thursday by the IOC.

Hashimoto said this was particularly true for residents of Japan, where less than 2% of the population has been vaccinated.

“I myself fully understand that people will not feel comfortable,” she said, referring to young athletes jumping to the front of the line ahead of the elderly and other vulnerable populations. “This should not impact the vaccination of the priority population in Japan."

Tokyo organizers said Friday that legs of the torch relay set for Tuesday and Wednesday in southern Fukuoka prefecture would not be held on public roads. The statement was vague but said the event would be held “without spectators" in park-like spaces.

This is at least the fourth time since the torch relay began on March 25 that legs have been canceled or rerouted because of concerns about the virus.

The torch relay involves 10,000 runners crisscrossing Japan and ending on July 23 at the opening ceremony in Tokyo.

An online petition calling for the Tokyo Olympics to be canceled has exceeded 200,000 signatures in two days. The petition is addressed to Bach and Prime Minister Yoshihide Suga. It says the games should not be held in order to protect public health.