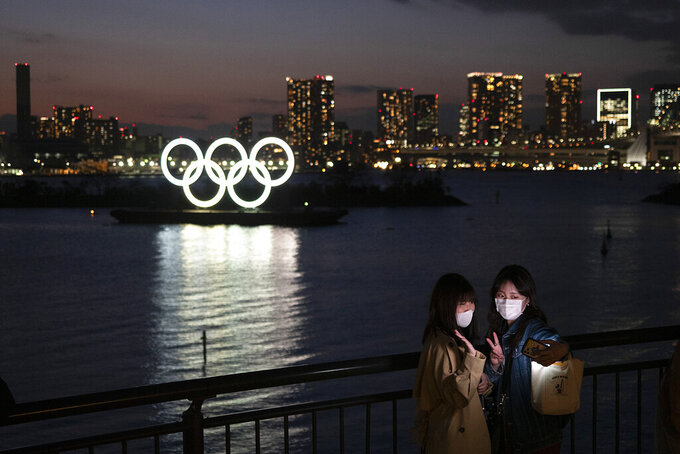 TOKYO (AP) — The Olympic torch relay is yet another hurdle for the postponed Tokyo Games. It kicks off in two weeks from northeastern Japan, and any stumble could sow more doubts about the risk of holding the Olympics in a pandemic.

A year ago, the Olympics were postponed just as the relay began. The start will again be from Fukushima prefecture, the center 10 years ago of the devastating earthquake, tsunami and meltdown of three nuclear reactors.

Olympic organizers are asking for restraint along the four-month route that will touch all 47 prefectures and involve 10,000 runners. Shouting and cheering will not be allowed. Polite clapping will be the order of the day. Torchbearers can run without a mask if they choose. And there could be changes to the routes and some stops and starts depending on conditions.

The start of the torch relay on March 25 is also likely to be held without fans, according to local reports. The Olympics open on July 23, followed by the Paralympics on Aug. 24.

Q: Why are organizers taking this risk?

A: Because of the large sponsorship deals with Coca-Cola and Toyota. There was talk of doing away with the relay, but that was quickly nixed. The Olympic relay dates back to the 1936 Berlin Games.

Organizers hope this time it will drive enthusiasm for the Olympics. Surveys show about 80% of the Japanese public say the games should be postponed or canceled.

The success of the relay is so important that Toshiro Muto, CEO of the Tokyo organizing committee, has been put in charge. Any slip, of course, would raise more questions about risks around the Olympics.

Q: Where do we stand again with fans from abroad? Will there be any?

A: If you believe all of the leaks in the Japanese media — no. Organizing committee president Seiko Hashimoto has said she hopes to have a decision by March 25. Local reports say the decision to exclude foreign fans has already been made and could be announced as early as next week.

The other key decision will be the numbers of fans allowed in venues. This is expected in April.

Local organizers have budgeted $800 million in income from ticket sales. It’s their third largest source of income, and it will take a large hit. Any shortfall will have to be made up by the Japanese taxpayers. Estimates suggest they are bearing about 80% of Olympic costs.

Q: Are these Olympics snake-bitten?

A: It's hard to recall one that has been more troubled. And remember that Rio de Janeiro in 2016 and Sochi in 2014 had massive problems.

Ironically, IOC President Thomas Bach said Tokyo was the best-ever prepared Olympics until the pandemic hit. And, despite the problems, Japan is one of the few countries that could pull this off.

But IOC member Tsunekazu Takeda was forced to step down two years ago as head of the Japanese Olympic Committee in a vote-buying scandal tied to Tokyo winning the bid in 2013. His IOC membership was also removed. He denied any wrongdoing.

Last month, Yoshiro Mori was forced to resign as president of the organizing committee after making sexist remarks. Basically, he said women talk too much.

Then there is the issue of costs. A study by the University of Oxford says these are the most expensive Olympics on record.

Q: Can athletes expect to be tested often?

The first edition of the so-called Playbooks released last month says athletes will be tested about every four days in Japan. The current Playbooks are vague and are to be updated in April and June with more specific information.

The Kyodo news agency reports that the IOC has asked Tokyo for even “more stringent” testing.