Track trials could bring demonstrations on the medals stand 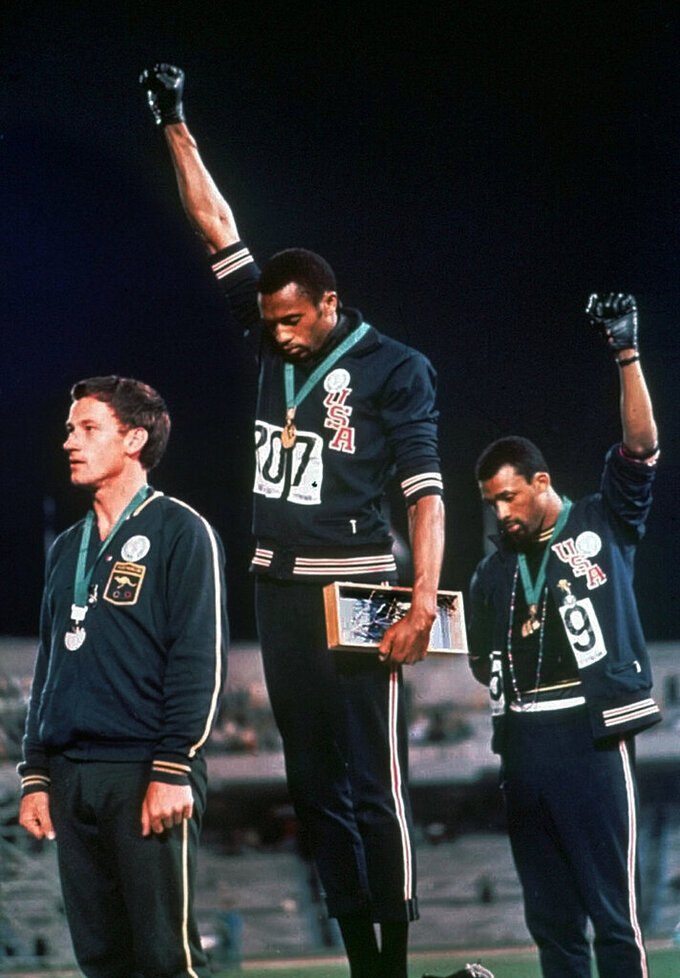 EUGENE, Ore. (AP) — If American athletes plan to use their Olympic stage to take a knee or raise a fist, U.S. track and field trials figure to be the first place to see what sort of reaction they'll get.

The majority of America's Black Summer Olympians come from track and field, which puts the medals stand in Eugene under the spotlight when the action starts Friday. In a major shift in policy, the U.S. Olympic and Paralympic Committee resolved to not sanction athletes who use their platform for social demonstrations.

“I'm happy in the sense that the United States has moved enough today that they will allow their athletes to make a statement on the victory stand as far as kneeling and putting the fist in the sky,” said John Carlos, who along with Tommie Smith, raised his fist on the medals stand at the 1968 Olympics.

“But the question I have is, when an athlete goes beyond the United States and steps into the realms of the international Olympic community, how supportive is the United States going to be to those athletes?” Carlos said.

The USOPC stance does, indeed, set up the possibility for conflict and confusion at the Tokyo Games, where the IOC will be in charge, and has not clearly defined how it will handle violations of Rule 50 — the rule that prohibits inside-the-lines demonstrations.

But at trials, which are owned and operated by U.S. entities, athletes are free to use their platform, so long as their demonstration fits within guidelines that were released earlier this spring.

“An athlete might want to pay homage because they know they can do it here, and they're not sure what they can do in Tokyo,” said Moushaumi Robinson, the sprinter who serves as chair of the USOPC Council on Racial and Social Justice. “So, this is our battle right now, and the next battle is to wait and see what the IOC says the sanction might be there.”

Gestures made at the Pan-Am Games in 2019 by hammer thrower Gwen Berry and fencer Race Imboden rekindled a contentious debate about Rule 50. After their demonstrations, USOPC CEO Sarah Hirshland sent both letters of reprimand and put them on probation.

The summer of violence and protest in the wake of last year's killing of George Floyd added a new sense of urgency to the debate. While the IOC barely budged in altering the rule, citing an international survey of athletes as a key reason to hone closely to the status quo, the attitude in America was far different.

The USOPC formed the council that Robinson leads, and that group spent months formulating a list of dos and don'ts in an attempt to lend some certainty to the complicated topic of what constitutes an appropriate demonstration.

Berry said she wouldn't be surprised if the USOPC support leads to a cascade of demonstrations in Tokyo that the IOC will be hesitant to stop.

“The IOC can't punish us all, the IOC can't ban us all, and the IOC doesn't want any problems,” she said in a recent interview with TV station KSDK in St. Louis.

In a letter that accompanied the guidelines for the demonstrations, Hirshland drew the ire of some U.S. athletes by adding the caveat that “while we support your right to demonstrate peacefully in support of racial and social justice, we can’t control the actions others may take in response.”

It led to questions, the likes of which Carlos is asking, about how far the USOPC will really go to support athletes who take a stand in Tokyo.

The IOC has traditionally turned to national governing bodies to enforce its rules — that was the case when Smith and Carlos got sent home after raising their fists at the 1968 Games. By taking itself out of that role, the USOPC has taken a stand, while also adding some uncertainty to the outcome of any demonstrations that occur in Tokyo.

There will be less uncertainty at trials. USA Track and Field CEO Max Siegel said “I'm not dealing in hypotheticals, and I'm not at all worried because our athletes are thoughtful.”

“It's not new to us as an organization, us being proactive in terms of educating athletes to use their position for positive social change," Siegel said. “It's what we do every day. We've been trying to educate athletes on how you can use the platform and be positive advocates.”