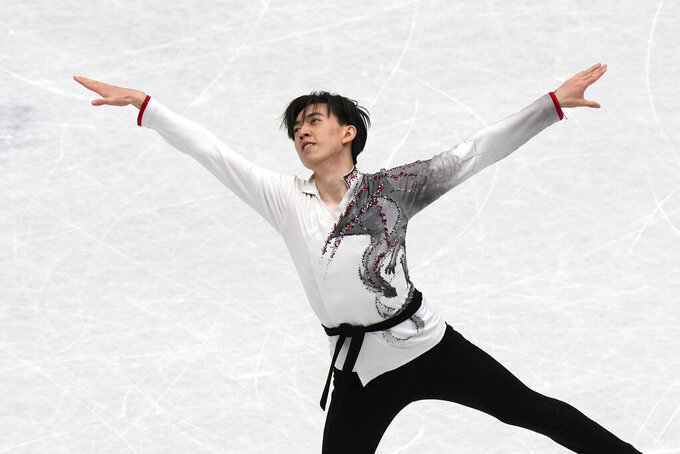 Olympic bronze medalist Shoma Uno concluded a dominant figure skating world championships by winning the gold medal Saturday, while Vincent Zhou of the U.S. catapulted from sixth after his short program to earn the bronze.

Uno finished with 312.48 points to easily outdistance Yuma Kagiyama, who finished second to his Japanese teammate in both the short program and free skate. Kagiyama had 297.60 points while Zhou finished with 277.38.

“I haven’t won too often so I’m very happy about that,” Uno said. “I was watching all the performances of the previous groups so I knew very well where I was. All my emotions went into a smile at the end of my program.”

In the free dance, which wrapped up worlds in Montpellier, France, Olympic ice dance champs Gabriella Papadakis and Guillaume Cizeron delivered for their home fans a memorable performance at Sud de France Arena.

Papadakis and Cizeron shattered the world record with their rhythm dance, then did the same in the free dance Saturday, giving them a total of 229.82 points. Madison Hubbell and Zachary Donohue were second with 222.39 points in the final competition of their career together, while American teammates Madison Chock and Evan Bates finished third.

It was an emotional and redemptive performance Saturday for the 21-year-old Zhou, who helped the Americans win team silver at the Beijing Games — a medal that could be elevated to gold pending a Russian doping investigation.

Zhou was preparing for the men's competition when he tested positive for COVID-19, knocking him out of the rest of his Olympics. He was forced to spend nearly two weeks in quarantine before he was finally allowed out in time to perform in the closing exhibition gala, then was deemed a “close contact” and barred from the closing ceremony.

“I'm still very upset over the loss of that opportunity at the Olympics,” he said, “but I'm very grateful that I still had the chance to compete here at worlds. And again, I'm very proud of myself for putting out two strong performances.”

His performance Saturday ended a rollercoaster of a season on a high.

Before all of Zhou's trouble in Beijing, the Brown University student soared to victories in the lower-level Cranberry Cup and Nebelhorn Trophy before finishing second in his Grand Prix assignment at the NHK Trophy. Then, Zhou topped Uno and his American teammate Nathan Chen, the Olympic champion, at Skate America.

“I don't want to sound like a broken record, but as I've said a lot of times, I was mentally in a very bad place,” Zhou said. "I couldn't do anything. But I got myself on the plane, I got myself together, I took it one practice at a time and now I've put out two strong performances, and I'm so proud of myself.”

Chen, the three-time world champion, was unable to defend his title this week. He was putting in the final practice before heading to France, when an injury popped up last week that forced him to withdraw.

That opened the door for Uno to finally stand on the top step of the podium.

Long overshadowed by Japanese star Yuzuru Hanyu, the 24-year-old Uno finished second at the 2017 and 2018 world championships and was fourth last year. But he was a level above everyone else in France, following a personal-best score in his short program with another personal-best for his “Bolero” program in the free skate.

Seventeen-year-old American star Ilia Malinin, who is targeting the 2026 Olympics in Italy, was fourth after his short program but struggled with his free skate. He wound up tumbling all the way to ninth, though not without showing some of the vast promise that has made him the heir apparent to Chen in American figure skating.

“I think it was more pressure on myself, just wanting to skate good so badly and it kind of didn't work out,” he said. “I feel I was maybe a little bit too into the program. It was just a mess, so it's hard to explain what happened.”