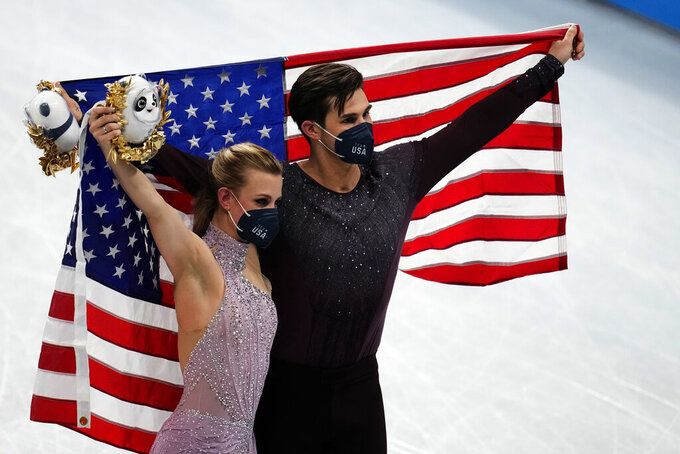 Bronze medal finishers Madison Hubbell and Zachary Donohue, of the United States, pose during a venue ceremony after the ice dance competition during the figure skating at the 2022 Winter Olympics, Monday, Feb. 14, 2022, in Beijing. (AP Photo/Natacha Pisarenko)

BEIJING (AP) — After skating to a bronze medal at the Beijing Games, American ice dancers Madison Hubbell and Zachary Donohue bent down and kissed the the ice where the Olympic rings were painted.

“It was just a moment, I think, for both of us to say goodbye to Olympic ice," Hubbell said, “and thank this journey that’s created, you know, the people that we are today.”

The longtime American standard-bearers in ice dancing embraced Monday after their free dance to Anne Sila’s “Drowning” to wrap up their competition. It marked their last Olympic skate, and the sweetest end to a decade-long career together that produced two world championship silver medals and the title at the Grand Prix Final.

Their bronze also means the United States has medaled in each of the first three figure skating events at the Beijing Olympics. Hubbell and Donohue were part of the team silver medal before Nathan Chen, cheering them on Monday from a vocal section of American fans in the corner of the Capital Indoor Stadium, captured gold in the men's event.

“To take in this new experience at the end of our career is something we’re very, very grateful for,” Donohue said.

That silver in the team event from last week — which fourth-place ice dance finishers Madison Chock and Evan Bates also helped earn — could be upgraded to gold if the Russian team is disqualified in a doping case.

In retirement, Hubbell and Donohue plan to go on tour and then start their own figure skating schools.

“We’re both going to start working towards building our own schools and coaching and supporting the sport and new athletes and new generations,” Hubbell said.

Chock and Bates skated a personal best with their avant-garde intergalactic space love story set to electronic music by Daft Punk, but were ultimately unable to overcome the deficit from their disappointing rhythm dance performance.

“It was just a shift in my mindset, and just staying very present in the present moment," Chock said. "And sometimes you just have harder days than others, and I accept that.”

Chock and Bates said they haven't decided on what's next for them in the sport.

The Olympic ice dance gold went to French pair Gabriella Papadakis and Guillaume Cizeron, who broke their own world record to win — a feat that narrowly eluded them four years ago at the Pyeongchang Games. Victoria Sinitsina and Nikita Katsalapov of the Russian team won silver.

For Hubbell and Donohue, the fact that their last Olympic performance was on Valentine’s Day was fitting, too, because the duo dated for more than two years after they started teaming up professionally in 2011. They decided to continue working together after the break up and now have three Olympic medals to show for it after winning team bronze in Pyeongchang.

Hubbell is now engaged to Spanish ice dancer Adrian Diaz. They plan to wed in June. Diaz and his partner, Olivia Smart, placed eighth at the Beijing Games.