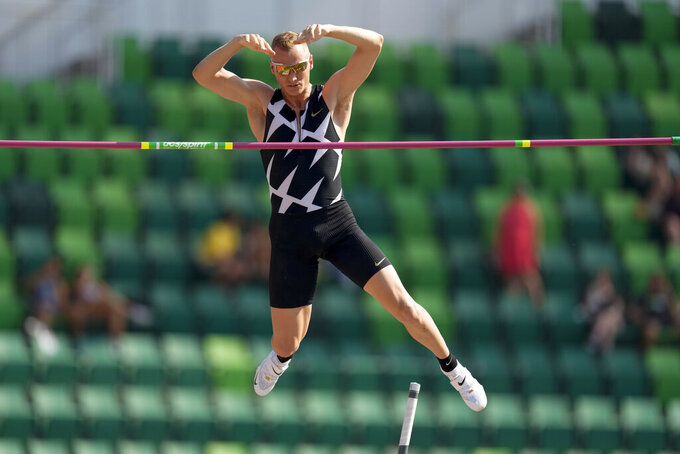 FILE - In this June 21, 2021, file photo, Sam Kendricks competes during the finals of the men's pole vault at the U.S. Olympic Track and Field Trials in Eugene, Ore. American world-champion pole vaulter Kendricks will miss the Olympics after testing positive for COVID-19. (AP Photo/Charlie Riedel, File)

TOKYO (AP) — The fragile nature of an Olympics during the pandemic came into sharp focus Thursday when the entire Australian track team spent time in a brief quarantine after American pole vaulter Sam Kendricks pulled out of the Tokyo Games because of a positive COVID-19 test.

The news about Kendricks — a two-time world champion and the American record holder — deprived the meet of one of its high-profile athletes, then rippled across the sport, which was scheduled to open less than 24 hours after the announcement.

He was one of dozens of athletes on the training track this week, and Australia announced it had put its entire 54-person team (41 athletes and 13 officials) in isolation and subjected it to testing after three athletes reported having casual contact with Kendricks.

A few hours after that, the Australian Olympic Committee announced the trio had tested negative and all but those three had been cleared to return to normal activities.

The three athletes remained in isolation, allowed to resume practice under strict distancing protocols. Australia said everyone was expected to be able to compete.

“Once again, abundant caution and our strict protocols continue to keep the team safe,” Australian team leader Ian Chesterman said. “We want every Australian athlete to be in a position to have their Olympic moment. We will continue to be vigilant.”

Shortly after Kendricks' positive test was announced, another pole vaulter, Germán Chiaraviglio of Argentina, said he, too, was out because of a positive test.

“It’s really hard to process something like this,” Chiaraviglio said.

Unclear is how many other athletes might have had contact with Kendricks, how Olympic officials will figure that out, and what they might demand of them with the track meet only a day away.

Approximately 2,000 athletes are listed in the track lineup — the largest sport on the sprawling Olympic program.

The U.S. Olympic and Paralympic Committee didn't offer details about Kendricks' positive. A social media posting from his dad, which was later deleted, said the 28-year-old from Mississippi, who is a member of the Army reserve, had tested positive but was feeling fine.

“We are following the USOPC and (local organizer's) guidance on next steps to ensure the safety of the remainder of our delegation, and to offer support to Sam,” a statement from USA Track and Field said.

The world record holder, Sweden's Armand Duplantis, said he was shocked to hear of Kendricks' withdrawal. This was supposed to be one of the top showdowns of the meet. The final is set for next Tuesday.

“As far as an hour ago I was still preparing myself for a big battle with Sam," Duplantis said. “He’s one of my main rivals, and somebody who was definitely going to push me in the final.”