US starts Olympic preparation in Beijing without 3 players 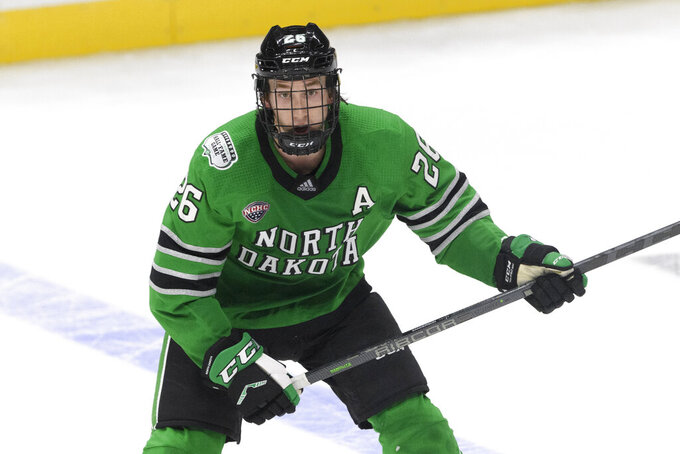 FILE - North Dakota defenseman Jake Sanderson plays against Penn State during an NCAA college hockey game on Saturday, Oct. 30, 2021, in Nashville, Tenn. USA Hockey and Hockey Canada are eyeing several college players to play at the Olympics after the NHL decided not to participate in Beijing. North Dakota’s Jake Sanderson has already agreed to play for the U.S. (AP Photo/John Amis, File)

BEIJING (AP) — Six weeks after the NHL pulled out of the Olympics and three weeks since USA Hockey finalized the roster, the full team was finally on the ice together Friday for the first time.

Star college defenseman Jake Sanderson remained in Los Angeles in coronavirus protocol, while veterans Steven Kampfer and Andy Miele were isolating in the athletes village after testing positive upon arrival.

All 12 teams in the tournament are trying to get up to speed quickly, and the U.S. has the extra hiccup of missing three players, even though there’s hope each can produce two negative tests at least 24 hours apart and be ready by the first game.

“We’re optimistic,” coach David Quinn said after the Americans’ first practice in Beijing. “It’s a day-to-day situation with these guys. We expect them to be back. It’s the world we live in. Every team’s going through it, and we’re no different.”

Each team is dealing with a different degree of difficulty pulling two dozen or more players together in a short period of time. Germany, China and others have tight-knit groups strengthened by established on- and off-ice chemistry, the opposite of Canada and the U.S. blending rosters with players ranging in age from 19 to 37.

Assuming Sanderson is cleared, the U.S has eight players under 21, many of whom have been teammates or faced one another in college.

“You’re playing against them every weekend or something,” said forward Matty Beniers, the youngest player on the team. “You’re kind of in the same shoes, so it’s easier to connect. And then you’ve got a couple veterans that kind of take the wheels and show us the ropes.”

Much of the team gathered in LA this week to skate and start the acclimation process. It was a common path: Canada held a training camp in Switzerland, and the Russians used a bubble environment in Moscow to get a head start on Olympic preparations.

“Time is of the essence,” Quinn said. “We don’t have a lot of time to play shinny.”

The U.S. and Canada are scheduled to face off in an exhibition game Monday. Canada opted not to practice Friday to allow players to march in the opening ceremony.

Time together at the world championships last year and familiarity gives Germany a boost of confidence at another Olympics without NHL players. Germany made an improbable run to the final in 2018, ending up with the silver medal after an overtime loss to the Russians.

Ten players are back from that team, and more than 20 played together at worlds last spring.

“I think that’s our biggest asset,” defenseman Moritz Muller said. “We’re kind of used to each other, but it’s still a new process to begin. It starts within us, and we’ve got to treat each other well and use the time that we have as a team to bond really closely.”

U.S. players began that before getting to Beijing. Veteran defenseman Brian Cooper and first-year pro goaltender Strauss Mann traveled together and swapped stories about their experiences playing overseas and their paths to the Swedish Hockey League.

Those conversations are happening for U.S. players in the locker room and the athletes village as they get to know one another.

“It starts just hanging out in the room and talking, getting to know each other and asking questions maybe you wouldn’t ask just to get to know each other a little bit faster and find some common ground,” Mann said. “I know it’s a really small hockey world, so it’s easy to find teammates that you played with that they also did or played against and it leads to conversation and then you can build those relationships there and it transfers on the ice.”

By asking a few more questions, Mann found out Brian O’Neill’s fiancée gave birth to a baby boy a few days ago and learned some other things about his teammates that have nothing to do with hockey.

While COVID-19 and strict testing requirements are keeping Sanderson, Kampfer and Miele off the ice for now, Quinn thinks the restrictions at the Olympics actually will speed up the crash course of building chemistry.

“You just have more time together,” he said. “All the teams in our situation are going to probably be able to create a quicker bond than maybe in normal circumstances.”