The US women will no doubt look different after the Olympics 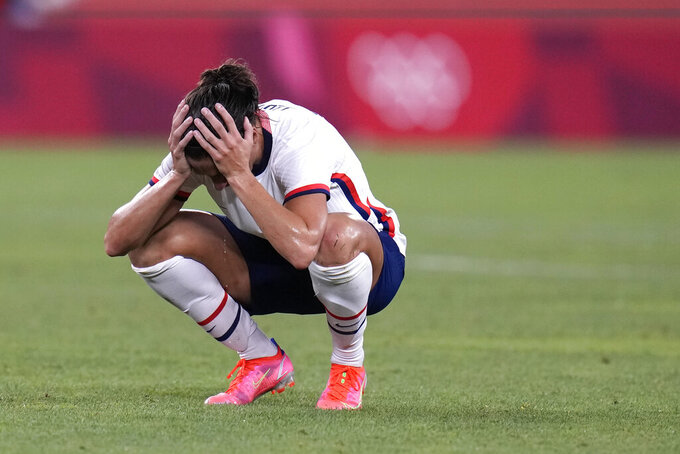 KASHIMA, Japan (AP) — The Olympics may be the last major soccer tournament for some of the biggest stars on the U.S. women's national team, including forward Carli Lloyd.

The United States plays its final game of the Tokyo Games on Thursday in Kashima. The Americans, who lost to Canada 1-0 in the semifinals, will face Australia for the bronze medal.

Lloyd, the oldest player on the team at 39, has often said that after this Olympics she'll be ready for the next phase.

First, however, she'd like one last medal — no matter the color.

“We've got another game to play, that's all I'm thinking about,” said Lloyd, who scored three goals in the first 16 minutes of the 2015 World Cup final. “If we're not going to walk away with a gold medal, I'd like to walk away with a bronze medal at the very least.”

Other Americans could decide to move on, too. Megan Rapinoe and captain Becky Sauerbrunn are both 36. Tobin Heath is 33. While still young, Heath will be 35 when the next big tournament, the World Cup, rolls around in 2023.

Nine of the players on the roster are in their 30s, including all of the forwards except for Lynn Williams. The original 18 players named to the Tokyo squad — rosters were later expanded to include four alternates — had the oldest average age of any previous U.S. Olympic team.

“I was wondering how quick that question would come up,” Rapinoe said with a laugh when asked about her future. “You guys are trying to put me out to pasture."

She said she hadn't really put too much thought into it — at least nothing she'd be willing to share.

“Of course, I'll obviously think about it after the tournament,” she said. “We don't really get the luxury of going one year at a time. We kind of have to think in these four-year blocks. So I haven't even thought about that, just trying to prepare for this, prepare for the next game.”

And it's anyone's guess which direction U.S. coach Vlatko Andonovski will go with the team in the future, but it's clear that the 2019 World Cup winners did not meet expectations in Tokyo.

They looked out of sorts, in fact.

The U.S. team opened with a 3-0 loss to nemesis Sweden — which also knocked the United States out of the 2016 Rio de Janeiro Games in the quarterfinals. That snapped a 44-game unbeaten streak that dated back to January 2019.

The Americans rebounded with a 6-1 victory over New Zealand, boosted by a pair of own-goals, before a 0-0 draw with Australia to make it out of the group stage. After the United States advanced 4-2 in a penalty shootout after a 2-2 draw with the Netherlands in the quarterfinals, Canada proved unbeatable in the semifinals.

"We kind of had a feeling they were ripe for the picking,” Canada captain Christine Sinclair said.

Lloyd agreed that the U.S. team hadn't shown their usual dominance. The Americans were looking to score a fifth gold medal, as well as become the first team to win an Olympic title following a World Cup victory.

“I don't think with the caliber of players we displayed anything of what we're capable of," Lloyd said. “You saw glimpses, but at the end of the day, it's a small margin to get by.”

The U.S. was hurt against Canada when starting goalkeeper Alyssa Naeher was injured and had to leave the game in the 30th minute. Jessie Fleming scored the lone goal from a penalty kick in the 74th minute against Naeher's backup, Adrianna Franch.

Canada will play for the gold medal against Sweden on Friday at the Olympic Stadium.

Now a veteran of four Olympics, Lloyd said it was too early to really know what went wrong. That would come later with perspective.