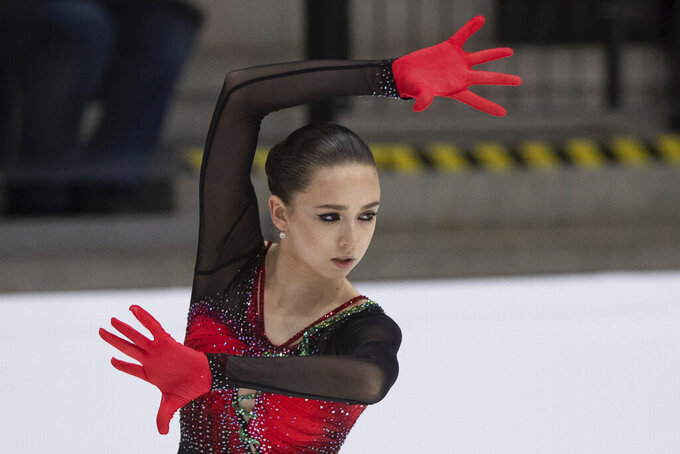 TALLINN, Estonia (AP) — Kamila Valieva underlined her status as the favorite for the women's Olympic figure skating gold medal as she won the European title by a commanding 22-point margin on Saturday.

Valieva continued Russian domination of women’s figure skating by completing her country’s sweep of all four events at the championships.

Competing at her first major championships, the 15-year-old Valieva fell on a triple axel in the free skate but landed three quadruple jumps, skating to “Bolero.” That meant Valieva stayed comfortably ahead of her two main challengers, her Russian teammates Anna Shcherbakova and Alexandra Trusova.

Valieva scored 168.61 points in the free skate, 17 below the world best she set earlier this season but still the highest of the competition, for a 259.06 total. World champion Shcherbakova recovered from a fourth-place short program to post a clean free skate and move up to the silver medal position with 237.42.

Trusova attempted four quads but fell on two of them as she finished third with 234.36.

Belgian skater Loena Hendrickx placed a surprise second in the short program, but two falls in the free skate and her lack of quad jumps left her fourth overall, 26 points off the podium.

Russians have won every women's gold medal at the European championships since 2014 with a succession of young skaters with ever-more spectacular jumps and often-brief careers, many trained by Valieva's coach Eteri Tutberidze.

Next month, Valieva will aim to become the third consecutive Russian to win the Olympic women's gold after 2014 champion Adelina Sotnikova and the Tutberidze-coached 2018 winner, Alina Zagitova.

Earlier, Victoria Sinitsina and Nikita Katsalapov saw off a challenge from another Russian duo to retain their ice dance title.

Skating to music by Russian composer Sergei Rachmaninov, Sinitsina and Katsalapov scored 130.07 points in the free dance for a total of 217.96 points to beat Alexandra Stepanova and Ivan Bukin on 213.20.

Charlene Guignard and Marco Fabbri took the bronze for Italy on 207.97.

Four-time world champions Gabriella Papadakis and Guillaume Cizeron of France skipped the European championships to reduce the risk of catching the coronavirus before next month's Olympics.