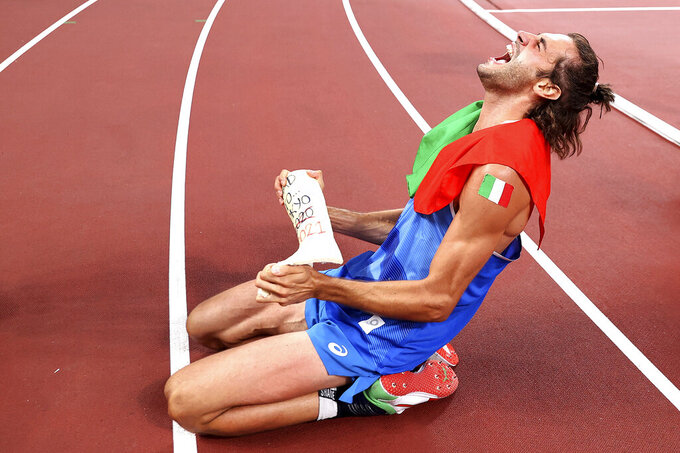 Gold medalist Gianmarco Tamberi of Italy celebrates on the track after jointly winning the final of the men's high jump at the 2020 Summer Olympics, Sunday, Aug. 1, 2021, in Tokyo, Japan. (Cameron Spencer/Pool Photo via AP)

TOKYO (AP) — The first hints that this was Italy’s year came when Italian band Maneskin won the popular Eurovision Song Contest in May.

Then came the European Championship soccer title run in June and July.

To top it all off, on the first day of August, Marcell Jacobs won the 100 meters at the Tokyo Olympics to succeed Usain Bolt as The World’s Fastest Man.

And who was the first man to embrace Jacobs after he crossed the line in a personal-best 9.8 seconds on Sunday? That would be Gianmarco Tamberi, the Italian high jumper who had just won gold in his event in a tie with Mutaz Essa Barshim of Qatar.

“We’ve accomplished something epic and extraordinary — just like the soccer success — and it’s uniting the country,” Malagò said. “We’ve had some epic victories, like winning the World Cup of soccer (four times), but in terms of the (Olympics), this is something that the grandchildren of our grandchildren will read about in history books one day.”

The successes have been a welcome respite for a country that spent much of the past 16 months in various stages of lockdown. Italy was the first country outside Asia to get hit by the COVID-19 pandemic and suffered immensely, particularly in the spring of 2020 when hospitals in northern Italy were overwhelmed with patients and the death toll soared. Italy has recorded more than 128,000 coronavirus deaths, the highest in the 27-nation European Union.

Malagò discussed the extraordinary lengths that he personally was involved in to make sure that athletes like Tamberi and Jacobs could continue training during the various lockdowns.

For an athletics team that didn’t win a single medal at the 2016 Rio de Janeiro Olympics, the pressure was on.

“And now we’ve got The World’s Fastest Man and the man who jumps the highest,” Malagò said. “Marcello and ‘Jimbo’ have made all Italians proud. Words don’t do them justice.”

With still a week to go, Italy already has won a total of 26 medals at the Games across all sports, only two fewer than the Azzurri took home from Rio.

Jacobs was born in Texas to an American father and an Italian mother. The parents split when Jacobs was 6 months old and he moved to Italy and never got to know his dad. They reconnected about a year ago by phone, as the sprinter tried to learn about his roots.

Vivian Masini, Jacobs’ mother, watched her son’s race from her home in northern Italy, where she runs a small hotel.

“I spoke to him between the heats and the semifinal, and before the final,” Masini told Sky Italia. “He was having a massage to let out (the nerves) before the final. … He wanted to have a laugh, and he told me, ‘Mom, don’t worry, I know what I’m doing.’

“Marcell really is a very good guy, humble, even if sometimes he want to disguise this with his tattoos and his (wild) behavior,” she added. “But he’s a very grounded person.”

Having grown up in Desenzano del Garda, Jacobs moved a few years ago to the hometown of his coach, Paolo Camossi, in Gorizia near the border with Slovenia. Then they set up at the Italian Olympic Committee’s training facility in Rome, where Jacobs created a full support team.

Romanazzi, who also works with some of Italy’s famous soccer players, was the one who persuaded Jacobs to search for the father that he never knew.

If he didn’t resolve the issue with his father, Romanazzi told Jacobs, he would never have the peace of mind to succeed at the highest level.

Jacobs, who has three children, went to stay with his mom during the first lockdown of the pandemic in April 2020. He was fortunate that a neighbor, Alberto Papa, is an athletics enthusiast and set up a 90-meter track on the grounds of his villa. So while many athletes in the country couldn’t train, Jacobs ran daily on Papa’s track.