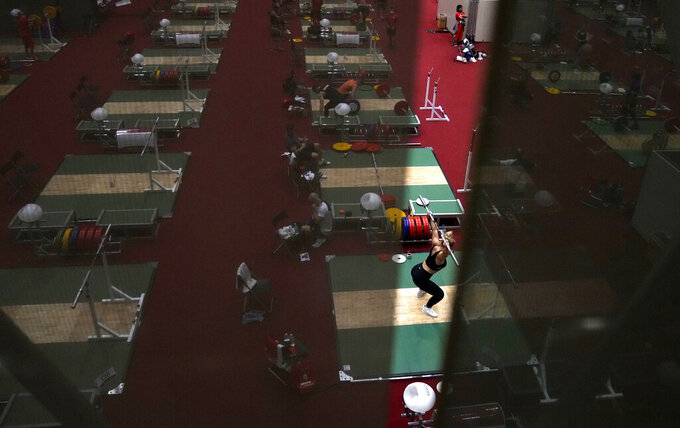 An athlete trains at the weightlifting training hall at the 2020 Summer Olympics, Tuesday, July 20, 2021, in Tokyo. (AP Photo/Petr David Josek)

TOKYO (AP) — Weightlifting had a rare moment in the Olympic spotlight at the Tokyo Games. It may not get another.

When Laurel Hubbard made history as the first transgender female weightlifter at the Olympics, the sport found itself at the forefront of social change.

After her competition ended with three failed lifts, Hubbard praised the “extraordinarily supportive” International Weightlifting Federation for its inclusivity.

Other events saw dramatic finishes, world records, a resurgence for the United States and celebrations for nations which rarely see a podium, like the Philippines and Turkmenistan. Cheering teams and a heavy metal soundtrack made for a party atmosphere.

Now the party is over and weightlifting is left alone with its old problems — doping, infighting and corruption. It doesn’t have a confirmed spot on the program for the next Olympics in Paris in 2024. The International Olympic Committee is waiting to see if the IWF can push through long-promised reforms.

“We’re just doing our best to show the sport is clean, trying to show the IOC that weightlifting has a future once we get ourselves sorted," Forrester Osei, one of two athlete representatives on the IWF board, told The Associated Press on Thursday.

Osei said IOC President Thomas Bach told him he “doesn't want to kick us out of the Games” when they met in Tokyo.

"He just wants to see fair play within our sport and he wants to see the athletes being taken care of,” Osei said.

Weightlifting's biggest problem is the same as the challenges faced by track and field or elite cycling — can spectators believe what they're seeing?

The competition in Tokyo ended with a bang Wednesday when Lasha Talakhadze broke three world records and lifted a total of 488 kilograms, more than anyone else in the sport's history.

The problem is that the bearded Georgian with the explosive lifts served a two-year ban from 2013 after testing positive for a banned steroid. The bronze medalist in the same event, Man Asaad of Syria, also has a ban in his past. Pan American Games champion Fernando Reis of Brazil was excluded after failing a doping test in June.

Still, weightlifters say progress is being made since the sport's darkest days — the 2008 and 2012 Olympics, when more than 30 medals were stripped from various lifters later judged to have doped.

When Maude Charron won gold last week, she paid tribute to Christine Girard, a fellow Canadian who only got gold from the 2012 London Olympics when lifters from Kazakhstan and Russia who placed ahead of her were both disqualified for the same substance, the steroid stanozolol. Charron said it was a mark of progress that she got her Tokyo podium moment.

“That’s (Girard's) medal, that’s her moment because she didn’t have it in real time,” Charron said. “For sure anti-doping made a great deal in just cleaning the sport ... There is a progression in this clean way.”

The IWF’s problems grew during the 45-year reign of Tamas Ajan, who was IWF general secretary for 25 years and president for 20 until stepping down last year.

“We have tested the IOC’s patience perhaps too much," USA Weightlifting CEO Phil Andrews told the AP.

Andrews was a prominent backer of interim president Ursula Papandrea, an American who was ousted in October and accused other board members of bullying and obstructing reform.

“Ultimately the IOC in particular has said: ‘You guys need new leadership. We don’t want to see the same people in charge,'" Andrews said.

Weightlifting officials will reconvene in Qatar on Aug. 28 and 29 to pass a stalled new IWF constitution. After that comes elections that could bring some of the new faces that Andrews says the IOC wants to see.

The constitution was deadlocked at the last meeting in June amid disputes between reformers and a faction led by the Ajan-era old guard. A compromise document is likely to include some of the reformers' key demands, particularly in reinforcing athletes' rights to seats on the board.

Despite the sport's problems, weightlifters are convinced they still have a recipe for success. Superhuman feats of strength — preferably with all-natural muscles — and a unique competition structure, with every lift a chance for triumph or disaster.

“Everybody wants to see somebody lift up heavy weight. It’s the mind, the body, over an object,” Osei said. “And that’s what makes it fun, to see a gentle giant come onto the stage and pick up heavy equipment.”