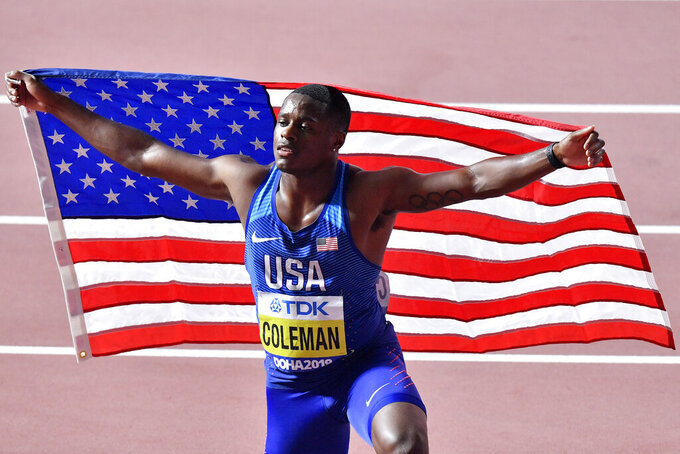 FILE - In this Sept. 28, 2019, file photo, Christian Coleman, of the United States, poses after winning the men's 100 meter race during the World Athletics Championships in Doha, Qatar. Reigning world champion Coleman insists a simple phone call from drug testers while he was out Christmas shopping could’ve prevented the latest misunderstanding about his whereabouts, one he fears could lead to a suspension. (AP Photo/Martin Meissner, File)

The likelihood that the world’s fastest man, Christian Coleman, might miss the Olympics next summer increased Wednesday when he received a provisional suspension for failing to be home when drug testers showed up last year.

Coleman, the reigning world champion at 100 meters, said his latest flare-up with the anti-doping system stemmed from a miscommunication that could have easily been resolved with a phone call from the doping-control officer who came to his house on Dec. 9. It was his third whereabouts infraction in a 12-month span and could carry a ban of up to two years.

His path to the starting line at the Tokyo Games may now be through a hearing room.

Coleman’s argument is being undercut, in part, by the fact that he was well aware of the ins and outs of the “whereabouts rule” because of a case against him that was dropped last year, before this latest incident.

“I think I can just be more mature about it,” Coleman said last year in discussing his close call.

The Athletics Integrity Unit, which handles anti-doping cases for World Athletics, said phone calls are not part of its testing protocol because they can make it easier for athletes to manipulate the testing process.

“Any advanced notice of testing, in the form of a phone call or otherwise, provides an opportunity for athletes to engage in tampering or evasion or other improper conduct which can limit the efficacy of testing,” the AIU said in an emailed statement.

Coleman's status going forward remains murky. According to the AIU website, his provisional suspension is listed as May 14, 2020 -- 13 months before the start of U.S. Olympic Trials. The Tokyo Olympics, postponed because of the coronavirus pandemic, are scheduled to open July 23, 2021.

An email to his agent and his sponsor, Nike, weren’t immediately returned.

Last season, Coleman got ensnared in doping drama after word of his whereabouts failure leaked to the media. The U.S. Anti-Doping Agency ended up dropping the case over a technicality in a very confusing rulebook. He went on to capture 100-meter gold at the world championships in Doha, Qatar, last September.

Through it all, the 24-year-old Coleman endured some damage in the court of public opinion. There were those ready to lump him in with a list of other big-name Americans such as Tim Montgomery, Marion Jones, Justin Gatlin and Tyson Gay who have been busted for doping over the years.

“At the end of the day, I didn’t do anything wrong,” Coleman said after his race in Doha.

Elite athletes across the world are required to fill out a “whereabouts form” to make it possible for anti-doping authorities to carry out surprise testing outside of competition. A violation means an athlete either did not fill out forms telling authorities where they could be found, or that they weren’t where they said they would be when testers arrived.

Three missed tests in a 12-month period can be considered an anti-doping violation.

Coleman noted in a wide-ranging blog he posted Tuesday night that his Dec. 9 whereabouts failure occurred when drug testers showed up at his residence while he was Christmas shopping. He also missed a test on Jan. 16, 2019, and another on April 26, 2019, due to a filing failure.

He said there was no record of anyone coming to his place and that if he had been called he was five minutes away at a mall.

Coleman questioned in his post why he didn’t receive a phone call when the testers were unable to find him, saying he had received calls “every other time” he was tested. He said he’s been appealing the latest missed test with the AIU for six months.

On Twitter, Coleman had an exchange with reigning Olympic pole vaulting champion Katerina Stefanidi after she wrote: “Just to be clear...testers DO NOT call you when they can’t find you. I have only heard of this happening to US athletes (many different athletes and occasions). Unless USADA has different rules than WADA, testers don’t call. You’re either where you said you’ll be or you’re not.”

Coleman responded: “What was your purpose in commenting? You’re wrong, I’ve had many DCOs (drug collection officers) tell me the protocol is to call the last 10 mins of the hour. And why would we have to input our contact info if this wasn’t the case? If you had nothing positive to say why say anything at all.”

Some of Coleman’s earlier missed tests were not with the AIU but with USADA, whose own handbook for athletes says phone calls are usually reserved only for the last five minutes of a time slot and “to confirm the unavailability of the athlete, not to locate an athlete for testing.”

In a statement, USADA said: “We can confirm the latest proceeding involving Mr. Coleman and we are collaborating with the AIU on the matter."

The AIU filed a similar charge this month against women's 400-meter world champion Salwa Eid Naser of Bahrain. She was already under investigation when she won gold in Doha last year in the fastest time since 1985.

Before the missed test in December, Coleman mentioned being more attentive about updating his whereabouts.

“Sometimes you just go different places and do different things and that’s not pressing on your mind to update the app about every single thing you’re doing,” Coleman said. “Going forward, I just try to do a better job about being more diligent about it.”