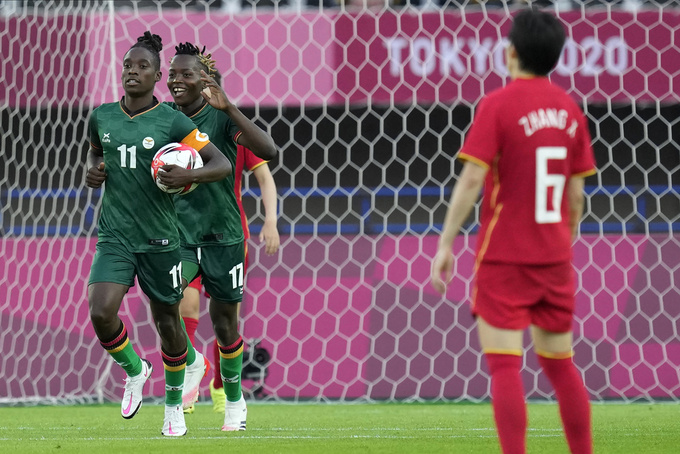 The 21-year-old has had hat tricks in each of the first two games for the Copper Queens, something that no other woman has done before in soccer at the Olympics.

“I still have a long way to go, I just have to be disciplined because I am aiming to become the best footballer in the world,” she said.

Banda has become the unexpected breakout star of the group stage with six total goals, matching the Netherlands' Vivianne Miedema.

Banda and Miedema have tied Canada’s Christine Sinclair for most goals in an Olympics — and it's still early in the tournament. Sinclair, the world’s all-time leading international scorer, set the mark with six at the London Games in 2012.

Miedema, who plays professional for Arsenal, is already one of the sport's top players. She’s the all-time leading scorer in the Women’s Super League, as well as the top career scorer for the Netherlands.

Banda was an largely unknown talent for Zambia, the lowest ranked team in the field at 104. She was a boxer before she took up soccer and advanced quickly, with professional stints in Spain and now the Chinese Super League.

The Copper Queens are making their first Olympic appearance. While their chances of advancing to the knockout round are slim, Banda is trying to make the most of her time on the big stage. The Cooper Queens face Brazil on Tuesday in Saitama.

“I’ve not set the number of goals I will score. I just want to score as many goals as possible. The little chance I have, I have to utilize it,” she said.

Coach Bruce Mwape called Banda, whom he has coached for four years, hard working and determined. Banda is the top career Olympic scorer among African women, surpassing Mercy Akide-Udoh, who had four total for Nigeria in 2000 and 2004.

“At training her attitude is different to others, she’s always serious. I would like one day to see her become a world star, like the ones we are meeting here," Mwape said. "I would like everyone to know now that we can also produce world stars.”

Zambia has a point in Group F, following a 10-3 loss to the Netherlands and a 4-4 draw with China.

With the group stage heading into its final day on Tuesday, only two teams have secured a spot in the quarterfinals: Sweden in Group G and Great Britain in Group E. Both those teams started 2-0.

Sweden, which blanked the top-ranked United States 3-0 in its opener, finishes group play with New Zealand. The Americans and Australia meet in Kashima tied on points, but the United States has the edge for second place in the group because of goal differential.

Great Britain plays Canada, winner of the bronze medal at the past two Olympics, in Kashima. Canada is the runner-up in Group E. Host Japan and Chile meet in the other group match in Rifu.

The Netherlands is atop Group F because of goal differential but even in points with Brazil. The Dutch, runners-up at the 2019 Women's World Cup, play China in Yokohama.

The 12 women's teams at the Olympics are divided into three groups. The top two teams in each group advance, along with the top two third-place teams.