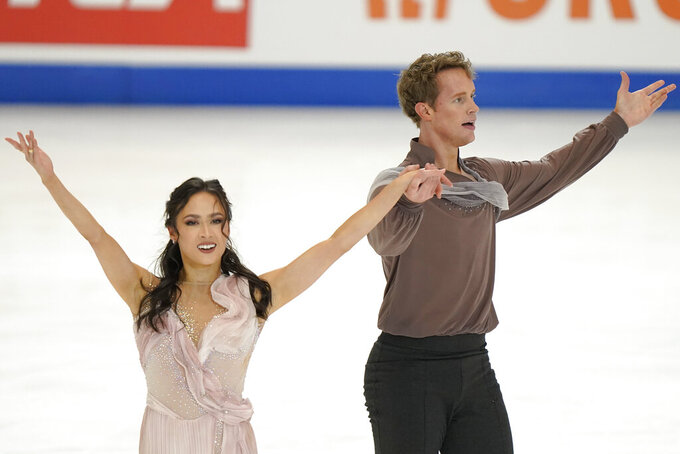 American figure skaters blasted a decision by the Russian Anti-Doping Agency to treat the Kamila Valieva doping case from the Beijing Olympics as confidential, with ice dancer Evan Bates on Sunday calling the secrecy of the investigation “an injustice” to those that performed clean.

Valieva helped the Russian team win gold at the Winter Games in February before finding out that she tested positive for a banned substance the previous December. The then-15-year-old Valieva appealed a provisional suspension and was allowed to skate in the women’s individual event, where she crashed several times and finished fourth.

The investigation stretched through the summer, and only this past Friday did Russia's anti-doping body say it would not publish the results of its investigation because of Valieva's status as a protected person due to her age.

“It's been so frustrating,” said Bates, who helped the U.S. win the silver medal, which would be elevated to gold if Valieva was found to have doped ahead of the Winter Games. “Extremely disappointing to be at this point, eight months later, and to still have it so shrouded in secrecy. And I feel like, you know, as a base line we should hope for transparency, and not only for the public but especially for the athletes involved. It seems only right.”

Along with the Americans, the Japanese team could be elevated from bronze to silver and the Canadians into bronze.

The International Olympic Committee refused to hold a medal ceremony for the team event in Beijing, which left Bates and partner Madison Chock along with their teammates and the Japanese team to head home without their awards.

“It was hugely disappointing,” Bates said, “but it seems to be growing and becoming exponentially more disappointing as the days and months go by and there's no resolution, and the most recent release by RUSADA about not making anything public compounds the frustration quite a bit. We're just waiting like the rest of us to hear.”

World Anti-Doping Agency rules say public disclosure in cases involving a protected person is optional — publishing a verdict is mandatory for most cases — and it “shall be proportionate to the facts and circumstances of the case.”

“If she is exonerated, there is nothing to hide and it should be made public,” Travis Tygart, the CEO of the U.S. Anti-Doping Agency, told The Associated Press. “Certainly, keeping the decision and facts secret make a mockery of the whole process, and there is no wonder athletes and the public do not trust the global WADA anti-doping system.”

Tygart called on WADA, the IOC and the International Skate Union to immediately announce an appeal of any decision and hold an open process, as the rules provide, so there is confidence in the final outcome.

“Short of this," Tygart said, “it's impossible for athletes or the public to believe what happened at the 2022 Beijing Games was real and not just another fraudulent win by the Russians like so many before, as the evidence has clearly shown.”

Since the Valieva case became public, the ISU has raised the minimum age for skaters comping at the next Winter Games in 2026 in Italy to 17 years old. But that does nothing for those who were impacted by the Valieva case in Beijing.

“Again, like, 19 athletes or however many are waiting for their medals all competed clean,” said Bates, who along with Chock won Skate America on Sunday, “and I think we've been pretty respectfully quiet through these months.”