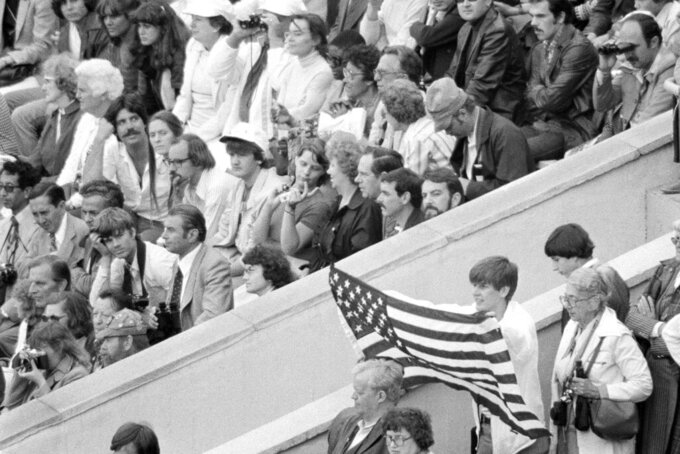 EDITORS — With the Tokyo Olympics postponed for a year because of the coronavirus pandemic, The Associated Press is looking back at the history of Summer Games. This story was published in the Huntsville Times on August 7, 1980. The story is published as it appears in the newspaper.

Life in Moscow may never be the same

Olympics May Cause Cultural Shock

MOSCOW (AP) — Life in Moscow is winding down after 16 days of Olympics euphoria, but Soviet society is likely to feel effects of the Summer Games for years to come.

Moscow was physically altered for the Olympics by construction of nine hotels and eight sports centers, and coats of bright paint on every major building.

Traffic is flowing freely again and open markets are crammed with fruits and vegetables with the lifting of domestic travel restrictions at the end of the Games last Sunday.

But there are other longterm aspects of staging the first Olympics competitions in a Communist-governed country.

The 1957 World Festival of Youth, the first mass influx of Westerners and their ideas to Moscow in the postwar era, is credited with giving a strong impetus to the post-Stalin liberalization period.

The effect could be much the same after the Moscow Olympics, some observers believe, even with significantly fewer Western teams and spectators because of the U.S.-led boycott to protest the Soviet military intervention in Afghanistan.

At the least, many Soviet citizens are unlikely to soon forget the whiff of Western culture they got rubbing shoulders and swapping souvenirs with visitors at sports events.

“Municipal bodies and all Muscovites contributed to creating an atmosphere of hospitality during the games, of friendliness and mutual understandings,” Viktor V. Grishin, a member of the ruling Politburo, wrote in Wednesday's Moscowskaya Pravda.

It was Grishin who sounded a warning to Muscovites a year ago about the danger of ideological pollution from getting too friendly with Western visitors during the Olympics.

Special attention, he said then, had to be paid to “the morals of the younger generation so they have an ability to distinguish false and dangerous imperialist propaganda.”

Toward this goal, Moscow parents were urged to send their children to Young Pioneer camps during the Olympics.

Kids were rarely seen on the streets during the games, and most are still away. But there is ample evidence of life returning to normal in Moscow, just as there are many reminders that the Games have been over less than a week.

Traffic and travel restrictions to prevent the city from being overrun with non-Olympics visitors were lifted Monday, with mixed results.

The restrictions sharply curtailed supplies of produce to markets because many farmers who sell their privately grown fruit and vegetables — officially permitted by the government — were not permitted to travel to the capital.

A visitor to one market Wednesday discovered farmers from as far as 750 miles away hawking a wide variety of high quality produce.

“Many of us couldn't come during the Games, and those who could weren't allowed to leave the market,” said a peasant woman selling tomatos and plums.

But capital inhabitants are already grumbling that the influx of rural fruit and vegetable hawkers will lead to a shortage of goods in stores. The visitors are notorious for picking clean the shelves at the GUM department store and other shops on their buying excursions.

The legions of police and soldiers who guarded the Olympics are also returning to their bases in provincial cities. Moscow police are swapping their dress white shirts worn during the Olympic events for regular workday gray.

Olympics flags have all but disappeared, but signboards pointing the way to sports events are still up, and some souvenir stands remain open outside Lenin Stadium.

At the Olympic village, about 200 athletes from small African nations are the last of some 8,000 competitors during the Games. They will leave on Friday, permitting a relaxation of massive security measures that include soldiers patrolling electronic fences around the highrise buildings with Kalashnikov machine guns on the ready.