Behind China's Olympics, the saga of a chained woman unfolds 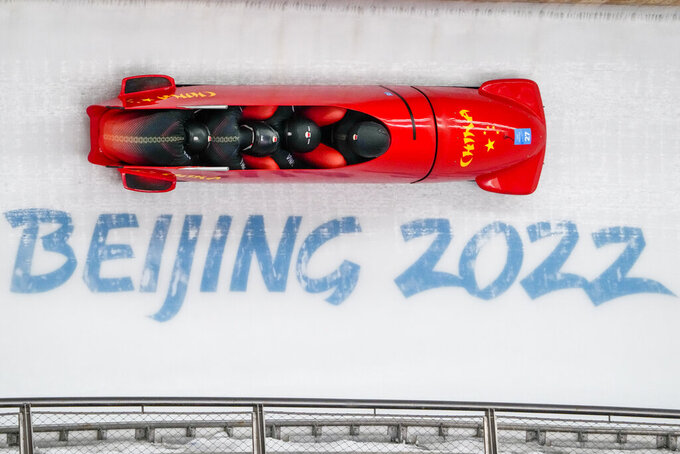 Li Chunjian, Ding Song, Ye Jielong and She Hao, of China, slide during the 4-man heat 1 at the 2022 Winter Olympics, Saturday, Feb. 19, 2022, in the Yanqing district of Beijing. (AP Photo/Pavel Golovkin)

TAIPEI, Taiwan (AP) — The post, on China's Weibo social platform, resembled many others posted by official media during these Olympics — an ode to freestyle skier Eileen Gu, known to Chinese as Gu Ailing.

Underneath, in the comments from users, came the questions. They were not on topic. They were about something else entirely — a chained woman captured in a viral video 500 miles from Beijing, on the southeastern China coast.

“Can you pay attention to Feng county? Where's the responsibility of national media?” one user asked. Said another: “Please thoroughly investigate the chained mother in Xuzhou so that every Chinese girl can accept the freedom and power given to them by this great era, just like our Ailing."

Since Jan. 28, the story of the chained woman who appeared in the video has continued to grow, evading numerous censors both digital and human. Underneath much Olympics coverage — from stories about copyright violations of mascot Bing Dwen Dwen to Gu's every move — Chinese commenters exhorted national media to highlight the growing scandal.

Even as the original accounts that shared the video disappeared and censors on social media platforms deleted articles and hashtags, amateur sleuths have kept the story alive online.

It is one case, one woman in a population of 1.4 billion at a moment when the Olympics are commanding a chunk of the national bandwidth. But as it unfolds, it affords a glimpse into what’s happening in China behind the Winter Games — and how people advocate for causes even in the widely censored, politically fraught space of Chinese social media.

Here's how it unfolded:

Days before the Lunar New Year holiday began on Feb. 1, a video spread online from a village in Feng county, located in Jiangsu province on the coast. It showed a woman with a chain around her neck.

The chain wasn't the subject of the video. A blogger had visited the village to show her as an example of someone from a poor rural family that would benefit from donations.

In the video, he offers her a jacket, asking if she's cold. Her response is unclear The weather outside is zero degrees Celsius (32 Fahrenheit), according to the video, and she is wearing a dirty pink sweatshirt. He puts a child's jacket on her. He does not address the chain. Another video by the same blogger shows an interview with the woman's husband, who proudly says he has eight children with his wife.

On Feb. 10, the city government issued a statement saying it had arrested three people, including the father of the eight children — the first two for human trafficking, the father for illegal detention.

On social media, people weren't having it. One popular Weibo user, "Jiangning popo," a police officer in Nanjing, said to his 5 million followers: “I’m so angry I could explode."

The changing narratives provoked people online into action. Some created complex charts laying out the differences between each government notice. And as the contradictory answers grew, others took the situation into their own hands.

Two women, known only by their online aliases Quanquan and Wuyi, traveled to Feng county to help Little Plum Blossom. Based on their video and audio posts, they drove around, writing slogans on their car with lipstick to publicize the case while talking to people about the issue. At one point, according to a video posted by Quanquan, police had the slogans scrubbed from their car.

The two never met Plum Blossom, and were barred from entering a hospital where she had been taken when trying to bring her a bouquet of sunflowers. Later, the same bouquet appeared in a short video segment from state broadcaster CCTV.

When the two stopped posting, others online stepped in asking people to call the police station to find out what happened, fearing they were detained. A women's rights activist in Beijing who declined to be named confirmed they had been detained and were released Thursday.

Meanwhile, two former investigative journalists set out to the village in Yunnan that Feng county officials had said the woman came from. According to an article they published on WeChat, they interviewed village residents who confirmed that someone once called Little Plum Blossom did live there and had been married before.

By this point, many people were chiming in. One Weibo user employed professional editing software to compare faces. A WeChat user looked up court records of women in Fengxian county who had been trafficked. Another former journalist posted a marriage license, purportedly from Little Plum Blossom — and raised an age discrepancy.

The inconsistencies highlighted a crucial point: No one had the whole story.

“It evokes a broad sense of frustration and anger and a sense of powerlessness among people when they see government abuses and negligence,” said Yaqiu Wang, a senior researcher at Human Rights Watch.

Little Plum Blossom has not been able to advocate for herself. In the original video that circulated, her speech is impossible to understand. Since then, the only video has come from CCTV, the state broadcaster, with her face obscured to protect her identity.

Little Plum Blossom has been taken to a hospital for now, according to CCTV. And on Thursday, the Jiangsu provincial government said it planned to send a team to investigate.

So the story's cycle continues — a cycle that churns together fact, rumor, outrage, and the good intentions of ordinary Chinese internet users. Eventually, it will produce results from an official final investigation, monitored closely by a skittish government that shuts down conversations that might reflect poorly on it.

And while the Beijing Olympics wind to an end, watched by the world in a way this case is not, provincial investigators begin to dig in. As they do, says Zhiying Ma, a professor at the University of Chicago who studies mental health in China, the most vital question remains unanswered:

“What’s the solution? What’s the future for that woman?”