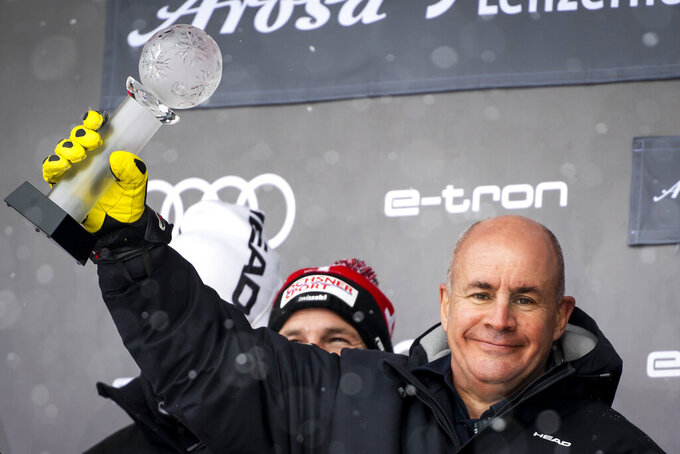 FILE - In this Sunday, March 21, 2021 file photo Johan Eliasch, Chairman of the Management Board of the HEAD group celebrates on the podium at the FIS Alpine Skiing World Cup finals, in Parpan-Lenzerheide, Switzerland. Billionaire businessman Johan Eliasch has been elected president of the International Ski Federation. The CEO of ski and tennis brand Head was one of four candidates and follows long time president Gian Franco Kasper. (Jean-Christophe Bott/Keystone via AP, file)

Eliasch, the long-time CEO of ski and tennis brand Head, got a majority 65 of the 119 votes from national ski federations in the first round of polling.

“I think it shows the FIS family is ready for change,” Eliash said of his clear win over three opponents. “I always said, ‘If you want to keep things the way they are, I am not your candidate.'"

Lindsey Vonn and Aksel Lund Svindal were among star athletes who raced on Head skis in their careers to endorse their former boss with video messages during 10-minute presentations made by each candidate.

Eliasch's credentials on climate change issues that represent a key challenge for skiing were endorsed in his manifesto by former U.S. Secretary of State John Kerry.

A Swede who runs Head from London, Eliasch had pledged during his campaign to leave his role if elected.

“I will step down as chief executive of Head," Eliasch told reporters in an online news conference after his win, "and if there are any decisions which have potential conflict of interest, I will of course recuse myself.”

Eliasch seems set to retain his financial stake in Head. He did not directly answer a repeated question if he would sell his shares, though he added “if we have phenomenal success for FIS it will benefit all stakeholders.”

He is just the fifth FIS president in its 97-year history and succeeds Gian Franco Kasper. The Swiss former journalist held the office since 1998 and leaves one year early.

The next FIS election is scheduled in one year's time after Eliasch oversees more than half the 109 medal events at the Beijing Olympics in February.

The new president has promised to give lower-ranked federations among FIS's 135 members more say in decision-making and more chances to host events.

On Friday, he pledged to centralize the media rights of FIS assets and start work “as soon as possible” on reviewing race formats and how to modernize presenting them to viewers.

Two election rivals, Lehmann and Arjes, won elections for seats on the ruling FIS Council and will work together with Eliasch, who will chair it.

Lewis was a candidate only for the presidency. She leaves the Switzerland-based governing body where she was secretary general for 20 years and one of the most prominent women in Olympic sports leadership. Her firing last October was orchestrated by Kasper.

“I will be remaining at the forefront of demonstrating the importance of innovations and partnerships in sport, and how these impact positively on society, along with promoting women in leadership positions,” Lewis said in a statement.

An Alpine skier for Britain at the 1988 Calgary Olympics, Lewis built close ties to Winter Games host China and is an honorary professor at Beijing Sports University.