Bolt's forecast: Watch out for Bromell in 100 at Olympics 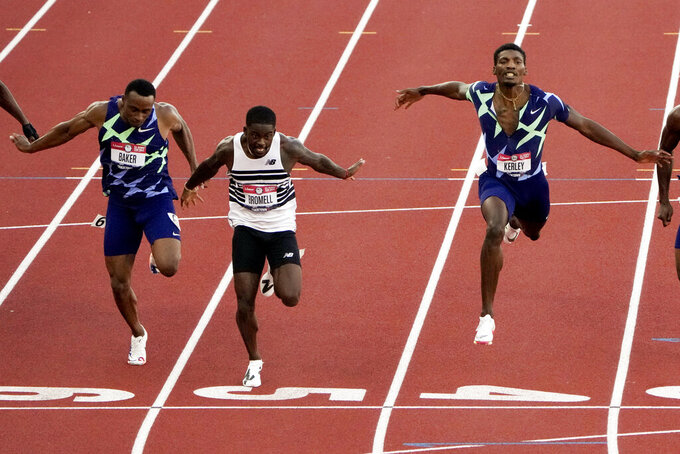 EUGENE, Ore. (AP) — Usain Bolt figures his world record is safe for now. But that Olympic gold medal — well, it has to go to somebody else this summer.

One of Bolt's favorites in the 100 at the rescheduled Tokyo Games will be Trayvon Bromell, who won the event last weekend at the U.S. Olympic track and field trials.

“The fact I get to watch, it’s wonderful and it’s a breath of fresh air for me,” Bolt told The Associated Press on Thursday. “But I’m competitive. And just to see somebody going out there and winning the 100 meters without me is going to be weird. But I’m excited to watch.”

He likes Bromell for his speed and his story. Bromell was an up-and-comer who finished tied for third at the 2015 world championships in a race Bolt won when he passed Justin Gatlin at the line for a .01-second victory. But Bromell dealt with persistent Achilles-heel issues following the 2016 Rio de Janeiro Games that kept him on the sideline for chunks of time. He has since reemerged and once again demonstrates blazing speed.

“Bromell is showing great promise,” said Bolt, who shares an agent with Bromell. “I must say, it’s something I’m looking forward to. He’s been a talent over the years and proven himself to be good. But he’s had some bad injuries. He’s showing up this season. I’m looking forward to seeing him in the Olympics.”

As for the 100 record of 9.58 seconds — set at the 2009 world championships — Bolt doesn't see anyone breaking that. Not this season, anyway.

Possibly down the road.

Bolt stays plenty busy at home in Kingston. He and his partner, Kasi Bennett, recently had twins they named Saint Leo and Thunder. They also have a daughter named Olympia Lightning.

About that name Thunder: "I just wanted to make a statement — Thunder Bolt. He’s going to love it when he grows up. That’s a good name."

Perhaps a powerful track name, too — just like Usain Bolt.

The charismatic Bolt has eight Olympic gold medals on his resume. (A ninth, in the 2008 4x100 relay, was stripped because of a doping case involving a teammate). Bolt had a signature pose after wins, too, and broke numerous records, including the 200 (19.19), which he also set in 2009.

Nowadays, instead of breaking records, he's making them as part of his music label. The sprinter, who years ago cofounded a Jamaican restaurant-night club called Tracks & Records, focuses on reggae but he envisions branching into the hip-hop realm at some point.

Although he enjoys the more easygoing pace of his new life, he does miss the world track stage and consistently putting on a memorable show. But one thing always snaps him back to reality — the workouts.

“When I go to the track and start training, I don’t miss it that much,” Bolt cracked.