Cleanup of US nuclear waste takes back seat as virus spreads 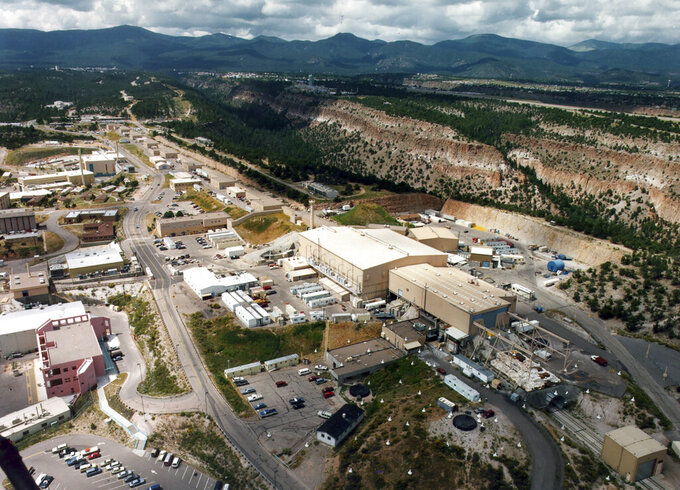 FILE - This file aerial photo, date not known, shows Los Alamos National Laboratory in Los Alamos, N.M. The U.S. government's efforts to clean up decades worth of Cold War-era waste from nuclear research and bomb making at federal sites around the country has chugged along, often at a pace that watchdogs and other critics say threatens public health and the environment. Now, fallout from the global coronavirus pandemic is resulting in more challenges as the nation's only underground repository for nuclear waste, the Waste Isolation Pilot Plant, finished ramping down operations Wednesday, April 1, 2020, to keep workers safe. (The Albuquerque Journal via AP, File)

ALBUQUERQUE, N.M. (AP) — The U.S. government’s efforts to clean up Cold War-era waste from nuclear research and bomb making at federal sites around the country has lumbered along for decades, often at a pace that watchdogs and other critics say threatens public health and the environment.

Now, fallout from the global coronavirus pandemic is resulting in more challenges as the nation’s only underground repository for nuclear waste finished ramping down operations Wednesday to keep workers safe.

Over more than 20 years, tons of waste have been stashed deep in the salt caverns that make up the southern New Mexico site. Until recently, several shipments a week of special boxes and barrels packed with lab coats, rubber gloves, tools and debris contaminated with plutonium and other radioactive elements were being trucked to the remote facility from South Carolina, Idaho and other spots.

That's all but grinding to a halt.

Shipments to the desert outpost will be limited for the foreseeable future while work at the country's national laboratories and defense sites shift to only those operations considered “mission critical.”

Officials at the Waste Isolation Pilot Plant warned state regulators in a letter Tuesday that more time would be needed for inspections and audits and that work would be curtailed or shifts would be staggered to ensure workers keep their distance from one another.

“This action is being taken out of an abundance of caution for the safety of employees and the community,” said Donavan Mager, a spokesman for Nuclear Waste Partnership, the contractor that runs the repository.

Some critical duties still must be done — like placing bolts in the repository's ceilings to ensure the shifting salt doesn't collapse.

It’s the same at Los Alamos National Laboratory, the once-secret city in northern New Mexico that gained famed for being the birthplace of the atomic bomb. Most employees there are working remotely, and the summer intern program is on pause.

Some work related to cleanup is ongoing, such as radiological surveys, inspections of hazardous waste storage facilities and maintenance of an early notification system designed to protect drinking water supplies.

In Washington state, tours of one of the most significant nuclear reactors in atomic history are on hold. Public meetings at the Hanford Nuclear Reservation have been canceled, and those who want to review documents in person are out of luck as officials there downsized to mission critical operations nearly two weeks ago.

The number of employees on site has dwindled to the “absolute minimum” needed to run safety and security programs and keep IT systems humming for those working at home.

The circumstances are unlike anything ever faced by managers at Hanford, Los Alamos and elsewhere.

They've indicated in letters, online posts and other documents that their decisions are guided by state and federal public health orders aimed at getting people to stay home and limit contact with others to stem the growing number of cases and deaths related to COVID-19.

Worker safety is always a top priority, said U.S. Sen. Maria Cantwell, who was among those who pushed during a congressional hearing in early March for more funding and federal action to speed up the nation's multibillion-dollar cleanup program.

“We are fighting to make sure workers and their families are taken care of during this crisis and that workers have the resources they need to meet cleanup goals when they are able to safely return to their jobs,” she told The Associated Press in an email.

Democratic senators had voiced concerns just weeks ago that the Trump administration's proposed budget for the U.S. Energy Department calls for less money to clean up the Cold War-era waste while funneling significantly more to fund modernization of the nation's nuclear arsenal.

The proposal provides nearly $27 billion, most of which would go toward nuclear security work that includes restarting production of the plutonium cores that are used as triggers inside nuclear weapons. Less than one-quarter of that would be used for cleanup of 16 sites in 11 states.

“The coronavirus pandemic demonstrates why we should get cleanup done once and for all," said Jay Coghlan, executive director of Nuclear Watch New Mexico. “What we do as humans ebbs and flows with history, but the radioactive and toxic wastes that we leave behind last longer than our recorded history. We should be acting now.”

Watchdogs also pointed to permit renewals and other regulatory actions related to cleanup that could get pushed back.

The federal government has agreements with several states to reach certain cleanup milestones. Officials were reticent to say what deadlines might be missed, noting only that the Energy Department's environmental managers are evaluating the potential effects on projects across the complex as the virus spreads.