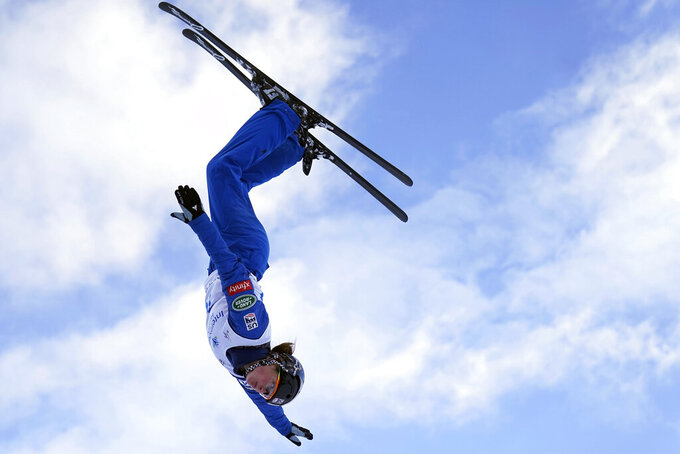 The two men were arrested this week, but police haven't said whether they've been able to recover the gear belong to Loeb, a member of the U.S. National Ski Team. She's hoping to get the items back before Wednesday, when she will try to qualify for the Winter Olympic Games in Beijing.

“I was freaking out at first, and then I started thinking that everything is going to fall into place," she said in an interview Thursday while taking a break from training in Park City, Utah. “You kind of have to take a step back and learn from it, and what I learned is you don’t leave things in your car."

Loeb and her supporters have been pleading for the thieves to return the stolen items, saying the $1,600 skis give her the best possible chance to qualify for the Winter Olympics, which begin next month.

The skis — along with U.S. ski team bags, a uniform, her helmet and other gear — were stolen from her mother’s locked pickup truck in a parking deck on Dec. 15, a police report states.

The men were arrested after a traffic stop. Police said they used surveillance video of the crime to match what the men wore during the break-in to what they were wearing during the traffic stop. Both are facing charges of entering an auto and criminal trespass/damage to property, a police report states.

Loeb, a 20-year-old former gymnast, has been on the national ski team for two years and competes in aerial freestyle.

Loeb is from Pintlala, Alabama, a small community near Montgomery, according to her biography at the U.S. ski team’s web site. She was competing with an elite gymnastics team outside Dallas when she got involved in aerial skiing through a friend.

Making the transition from gymnastics to skiing is easier than the other way around, she said.

Since the theft, she got a new helmet — a friend decorated it with an airbrush, “and it’s the coolest thing ever,” she said. “It’s blue camo with glitter and stars, and an evil eye on the back.”

Loeb said Thursday that she's trying to be positive about the theft. She’s also grateful for people in Atlanta and elsewhere who have tried to spread the word about her missing gear after she posted news of the crime on her Instagram account.

“The people in Atlanta have been so helpful,” she said. “They’ve been so kind.”