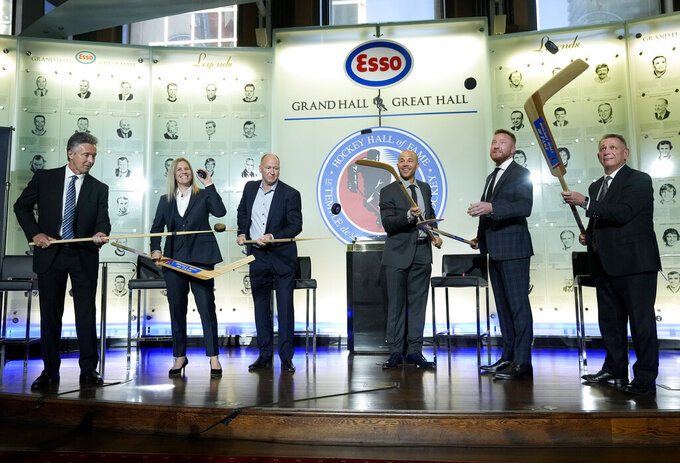 TORONTO (AP) — The Hockey Hall of Fame’s pandemic class finally got its moment in the spotlight.

Jarome Iginla headlined the five players and one executive enshrined Monday night — a year later than originally intended because of the COVID-19 pandemic.

The former captain of the Calgary Flames was joined by Marian Hossa, Kevin Lowe, Doug Wilson and Canadian women’s national team goalie Kim St-Pierre, while Ken Holland went in as a builder to round out the group voted in by the hall’s 18-member selection committee nearly 17 months ago.

“A career in hockey is a series of exciting chapters where you learn and grow from a wide-eyed rookie to a seasoned veteran,” Iginla said. “And then in a blink of an eye, you’re done. When I look back on those chapters, each reminds me of so many things I have to say thank you for.”

A mainstay with the Flames from 1996 to 2013, Iginla led his team in scoring 11 times, winning the Maurice Richard Trophy as the NHL’s top goal-scorer twice.

The Edmonton native, who also grabbed the Art Ross Trophy as the league’s top point-getter in 2001-02, combined to register 625 goals and exactly 1,300 points in 1,554 games in a career that included four other NHL stops.

Iginla got close to winning the Stanley Cup with Calgary in 2004, but the power forward couldn’t quite get over the hump in a hard-fought series against the Tampa Bay Lightning. Iginla did, however, have plenty of success on the international stage. He became the first Black athlete to win gold at a Winter Olympics when he helped Canada end a 50-year drought at the 2002 Salt Lake City Olympics.

Iginla also registered one of the most famous assists in his country’s history by setting up Sidney Crosby’s golden goal at the 2010 Games in Vancouver.

“It was truly, truly awesome,” he said of the moment.

“Being a young Black hockey player, it was important for me to see other Black players in the NHL,” Iginla. “In my first year in hockey as a seven-year-old, a kid came up to me and said, ‘Why are you playing hockey?’ Over the years I would hear, ‘What are your chances of playing in the NHL? There’s not many Black players.’"

The induction ceremony usually takes place in a plaza attached to the Hall of Fame in downtown Toronto, but this year’s event was held across the street at the larger Meridian Hall.

Hossa is the only player in NHL history to play in three straight Cup finals with three different teams. He finally got his hands on hockey’s holy grail in 2010 with the Chicago Blackhawks after losing the title series as a member of the Pittsburgh Penguins in 2008 and the Detroit Red Wings in 2009. He played for a total of five teams, registering 525 goals and 1,134 points in 1,309 games.

“Growing up in a communist Czechoslovakia, I didn’t know much about the National Hockey League,” said Hossa. “My early dreams focused entirely on playing for my country. But everything changed when I got my hands on a VHS tape of Wayne Gretzky. I was mesmerized.”

Unlike some of their 2020 classmates — Iginla and Hossa were elected in their first year of eligibility — Lowe and Wilson had to bide their time before getting the hall call after retiring. Wilson waited 24 years while Lowe’s patience stretched over 19 springs.

Lowe, 62, won five Cups in his 13 seasons with the Edmonton Oilers, but was overshadowed by the offensive exploits of teammates like Gretzky, Mark Messier, Paul Coffey and Jari Kurri. The seventh player from the Oilers’ dynasty elected to the hall, he won a sixth title with the New York Rangers in 1994.

“Over the years since I retired, people would ask me how I felt about not being in the Hall of Fame,” Lowe said. “I’d say, ‘You know, six Stanley Cups is OK. I have enough personal satisfaction.’ Well, I was lying.”

Wilson played 14 seasons with Chicago, winning the Norris Trophy as the league’s top defenseman in 1982. Traded to the expansion San Jose Sharks in 1991, the Ottawa native played his final two seasons on the West Coast — he was the first captain in franchise history — before later moving into the front office, where he’s served as GM since 2003.

With his playing career over and a young family to feed in the mid-1980s, Holland’s mother suggested her son get a job selling vacuum cleaners to pay the bills. He didn’t listen and eventually joined Detroit as a scout before working his way up to assistant GM. Holland was promoted into the GM role in 1997, and native spent 22 seasons in the post, guiding Detroit to three Cups.

Now the general manager of the Edmonton Oilers, he pointed out Tuesday will be exactly 41 years since he made his NHL debut as a player for the Hartford Whalers.

“I was 25 years old, the opportunity of a lifetime,” said Holland, now 66. “After the first period, I felt I’m here to stay. Second period, I gave up five goals, down 6-1 going into the third period, I’m sitting in the intermission thinking to myself, ‘Ken, you’re never going to be in the National League league ever again.’

“I guess you paraphrase an old expression: ‘Hockey has been very, very good to me after I stopped trying to play it.’”