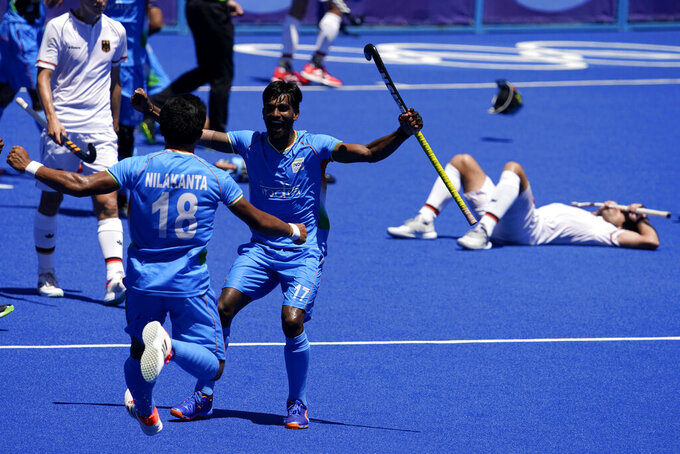 TOKYO (AP) — The celebrations started simultaneously in Tokyo and across India for a bronze medal that’s taken 41 years to forge.

For the most successful nation in Olympic field hockey competition, India’s 5-4 victory over Germany in the bronze-medal match at the Tokyo Games was celebrated like a gold.

India captain Manpreet Singh dedicated the medal to the country’s healthcare workers in the midst of the deadly coronavirus pandemic.

Singh said the preparation for the Tokyo Games felt like it had been more like 15 years than 15 months.

India rallied from 3-1 down and then fended off a German penalty corner in the last few seconds.

“It’s wonderful for hockey. Most people probably understand that it’s the national game, or well it used to be the national game of the country,” India coach Graham Reid said. “And of course everyone involved with hockey wants to see it back to that, and hopefully we’ve done our tiny little part in doing that today.

“It’s a fantastic feeling, I must admit. It’s come after a lot of sacrifices. It takes a long time to get where these athletes have gotten over this period, and all the sacrifices that that go unseen, I think, came back in spades today.”

India won seven Olympic gold medals between 1928 and 1964 — losing only in the 1960 final in that run. Then there was a big gap until another gold medal in 1980. Between the Moscow Games and Tokyo, India placed no higher than fifth.

Drag-flicker Rupinder Pal Singh, who was among the five scorers against Germany, shed tears as he predicted the start of a renaissance for the sport in India.

“People were forgetting hockey in India. They loved hockey, but they stopped hoping that we can win,” the Press Trust of India quoted him as saying. “But we won today. They can expect more from us in the future. Keep believing in us.”

India's women's team has a chance to win a medal, too.

After finishing fourth in 1980 and 12th in 2016 in their only previous trips to the Olympics, India's women's team will play for bronze against Britain on Friday.