Jade Carey goes from winning gold to hitting the books 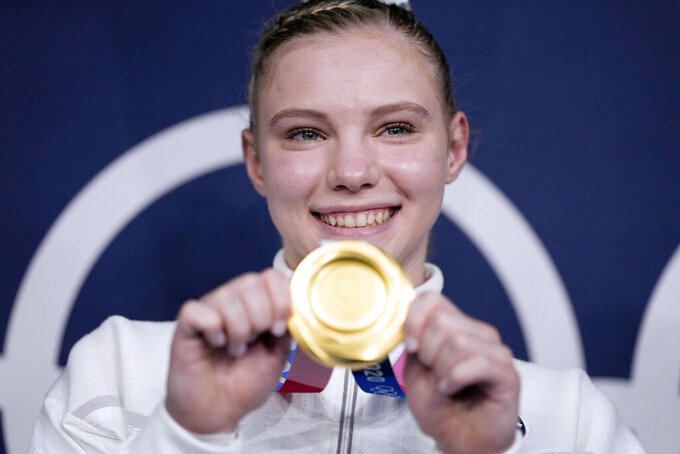 FILE - In this Aug. 2, 2021, file photo, Jade Carey, of the United States, poses after winning the gold medal for the floor exercise during the artistic gymnastics women's apparatus final at the 2020 Summer Olympics in Tokyo, Japan. Carey is finally embarking on her freshman year at Oregon State, after taking a somewhat winding route to Corvallis. Then again, the 21-year-old Olympic gold medalist is used to taking the non-traditional path. (AP Photo/Ashley Landis)

CORVALLIS, Ore. (AP) — Jade Carey is finally embarking on her freshman year at Oregon State, after taking a somewhat winding route to Corvallis.

Then again, the 21-year-old Olympic gold medalist is used to taking the nontraditional path.

After reaching the pinnacle of her sport in Tokyo, Carey has honored her commitment to compete for the Beavers, embarking on a new chapter where her elite and collegiate careers are intertwined.

Carey first visited Oregon State in 2015 and committed in 2017. But the plan was to compete in the Olympics and then to focus on school.

"Ever since the first time I visited here, I just fell in love with everything about this town and this campus," she said last week after arriving on campus. “I'm just especially excited to be part of the gymnastics team. It's just a really great group of girls and I love the coaches.”

After the coronavirus pandemic pushed back the Olympics by a year, Carey enrolled and took a few classes at Oregon State remotely from her home in Arizona while training.

“I just needed something to do besides just gymnastics,” the kinesiology major said.

She earned her spot at the Olympics in an unusual way, taking advantage of an International Gymnastics Federation provision for the 2020 Games that allowed athletes to lock up an individual berth if they racked up enough points at World Cup events.

Carey traveled the world collecting points and accepted her spot on the eve of the U.S. Olympic Trials. But that meant she was giving up a shot at making the four-woman team that ended up winning silver during the team competition. The federation has since dropped the points provision.

In Japan, Carey was considered one of the favorites in the vault but she tripped on the runway on her first attempt to fall out of contention. Disappointed but undaunted, she rebounded by nimbly executing her floor routine, to the cheers of her teammates looking on.

Gold in hand, it was time to move on.

The NCAA's Name, Image and Likeness policy, adopted in July, made her decision to attend Oregon State easier. She can maintain her elite status and go to school.

“I’m excited for all these new opportunities I get. With NIL, especially in gymnastics, there’s not really that choice anymore of should I go to college or should I be professional, you can get the best of both worlds," she said.

Carey isn't alone among the American gymnasts who competed in Tokyo. Sunisa Lee is a freshman at Auburn, Jordan Chiles will compete for UCLA and Grace McCallum is at Utah.

Still, there will be an adjustment. First, she'll have a new coach, Oregon State's Tanya Chaplin, after being coached for most of her career by her dad, Brian Carey.

She'll be limited to just 20 hours of training a week, down from the 40 for elite gymnasts.

And finally, she'll be juggling professional duties, crossing the country this fall with the Gold Over America tour to celebrate the U.S. team's Olympic success. In fact, her introduction to campus was a short one: She'll be heading out on the road next week.

“I will be gone for about seven weeks, six weeks will involve school but I'm going to do my classes online. Just kind of doing homework whenever I can,” she said.

During her short stay in Corvallis she was treated to an ovation from the Beaver faithful at a football game.

“It's such a pride point,” Oregon State athletic director Scott Barnes said about welcoming a gold medalist to campus. “And what an amazing alignment with what the Pac-12 is all about, which is Olympic sports and championships.”

The college gymnastics season begins in January. The Beavers will be training in a new 21,000-square foot facility that opened this spring.