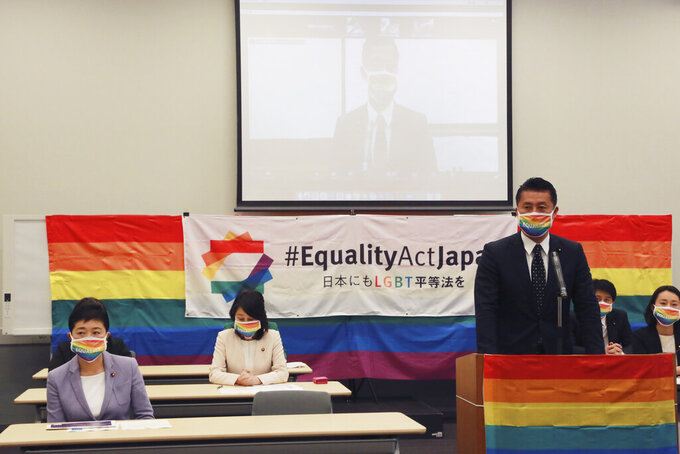 TOKYO (AP) — The head of the Tokyo Olympics on Tuesday took part in an event marking Japan's LGBTQ pride week at a center in the capital, as activists and dozens of lawmakers pushed for an equality law to be enacted before the games begin in less than three months.

Seiko Hashimoto visited Pride House Tokyo, an international initiative to provide a place for LGBTQ people and others to connect during the games. The first Pride House was set up during the 2010 Winter Games.

Japan is the only country in the Group of Seven major industrialized nations where same-sex marriages are not legally recognized. A Japanese court ruled last month that same-sex marriage should be allowed under the constitution, although the ruling has no immediate legal effect.

"We need to take action now,” Hashimoto said, adding that she wants people to remember the Tokyo Games as a “turning point in achieving diversity and harmony, including understanding for LGBTQ” issues. Hashimoto toured Pride House and met with LGBTQ activists, including athletes, for talks.

Elsewhere in Tokyo, over 40 lawmakers and their aides from the governing and opposition parties — all wearing matching rainbow-colored facemasks — as well as activists and supporters gathered in person and online for what they called a Rainbow Parliament event to push for enactment of an LGBTQ equality act. Tennis great and equal rights advocate Billie Jean King also sent a video message of support.

Late last month, activists submitted a petition with over 106,000 signatures to the governing and opposition parties calling for an equality law before the Tokyo Games begin on July 23. They say momentum for the legislation is growing as Japan gets more attention over its handling of gender equality, diversity and other rights issues.

“We hope to speed up an enactment of the equality act," said Yuri Igarashi, co-chair of the Japan Alliance for LGBT Legislation.

Kanako Otsuji, a lesbian lawmaker from the main opposition Constitutional Democratic Party of Japan, said she was a target of bullying at school. “I was often called a ‘manly girl’ and bullied," she said.

“Many people cannot speak up because of fear of discrimination. Then how can we change the situation? Legal protection is the only way,” she said. “For the children of the next generation to not face this kind of bullying, we need anti-discrimination laws.”

Many sexual minorities still hide their sexual identities in Japan, fearing discrimination at school, work and even from their families. In addition, transgender people must have their reproductive organs removed before their gender can be changed on official documents — a requirement that international medical experts and human rights groups criticize as inhumane.

Aki Nomiya, a transgender activist, said people whose appearances and official records don't match feel especially vulnerable. “Unless we are free of fear of prejudice and discrimination, we cannot live peacefully," she said.

Gon Matsunaka, who heads Pride House Tokyo and led Hashimoto on the tour, said the sports world remains unfriendly to LGBTQ people because of its gender specificity.

“In many sports, players are divided between men and women. In sports, masculinity is often emphasized because of competition in speed and power, and sexual minorities are often made fun of or harassed," Matsunaka said.