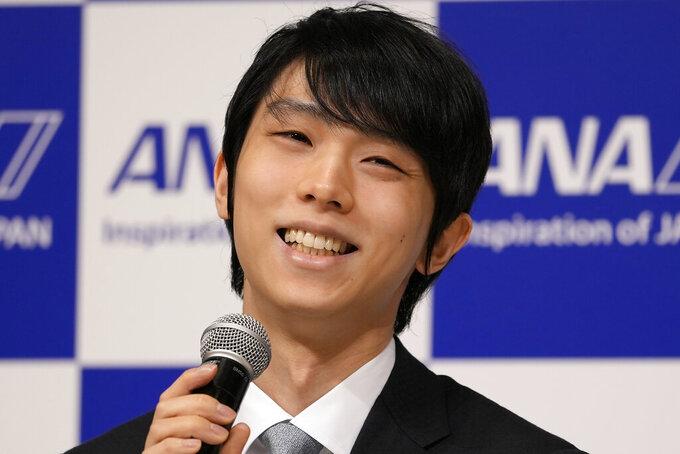 Hanyu seemed to leave the door open to a possible return of some sort. However, most of his focus seemed to be on skating professionally in exhibitions.

"This never ends," Hanyu said. “I'm not retiring or anything. I'm going to be better and I will work hard in my performances in a way that will make you think I am worth watching.

“I don't like the word ‘retirement’ so I don't really want to use it."

Hanyu won back-to-back gold medals at the 2014 Sochi Games and the 2018 Pyeongchang Olympics. But he finished fourth in Beijing five months ago and had been noncommittal until Tuesday's press conference at at Tokyo hotel.

“I'm not going to participate in competitions from now on,” he said. “Of all the things I've done so far, I think I've gotten what I should have in terms of results from competitions. I also feel that I will no longer seek these kind of evaluations.”

The 27-year-old Japanese skater is also a two-time world champion, and a four-time Grand Prix Final champion. But he failed in an attempt in Beijing to become the first to land a quad axel in competition.

He indicated he could continue to try to land the quad axel.

“I don't feel particularly sad,” Hanyu said. “I would like to do my best from here on out and I think that there will be more opportunities to see my skating in various ways — not just in the limited space of competitions.”

Hanyu has little left to prove. He has been the world's most watched skater for a decade and the sport's standard for excellence. He was the first Asian man to win gold in Olympic figure skating.

His road to Beijing was fraught with injury. Hanyu acknowledged having a difficult time finding the same motivation for Beijing that carried him to his two Olympic gold medals.

Ever since 2010, when he was seen toting a box of tissues with Winnie the Pooh on it, his legion of supporters have showered the ice with hundreds of stuffed Pooh bears rather than traditional flowers whenever he competes.

They nearly covered the ice in a blanket of yellow when Hanyu triumphed at the Pyeongchang Games.

There were only a few thousand fans allowed inside the tightly controlled Olympic venue in Beijing to watch Hanyu, and they were prohibited from throwing anything on the ice, a safeguard imposed by organizers to minimize the potential spread of COVID-19.

Instead, they massed outside the gate of the arena, hundreds of them standing in the cold February sun, waiting with their Poohs for Hanyu’s bus to drive by and bid him farewell.