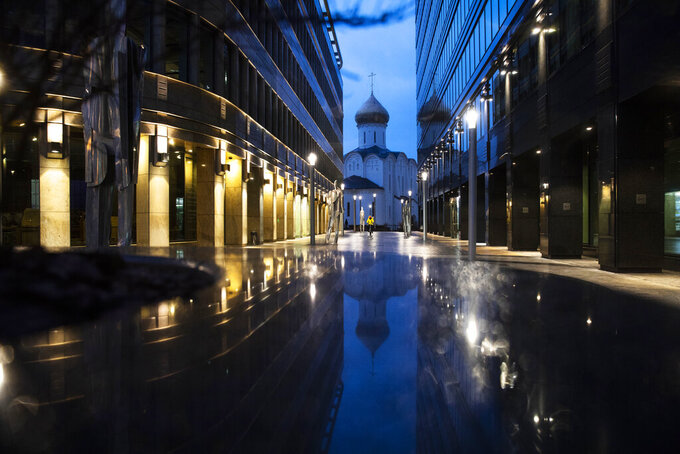 A food delivery courier, center, rides a bike among emptied office buildings during an evening rush hour, with the St. Nicholas church in the background, in Moscow, Russia, Thursday, April 2, 2020. President Vladimir Putin has ordered most Russians to stay off work until the end of the month to curb the spread of the coronavirus. The new coronavirus causes mild or moderate symptoms for most people, but for some, especially older adults and people with existing health problems, it can cause more severe illness or death. (AP Photo/Pavel Golovkin)

— Virus death toll and unemployment surge in Europe and U.S.

— Turkey plans to treat COVID-19 patients with blood from survivors.

— Clerics councils in Pakistan urges Muslims to worship at home.

MOSCOW — Russian police detained activists trying to deliver protective gear to a hospital on Thursday amid the growing coronavirus outbreak and widespread reports of shortages of masks and hazmat suits.

Members of the Alliance of Doctors union, supported by opposition politician Alexei Navalny, started a fundraising campaign this week to buy protective gear for hospitals in need. On Thursday, the union’s leader Anastasia Vasilyeva and a group of activists drove to a hospital in the Novgorod region 400 kilometers (249 miles) northwest of Moscow, with the first batch of masks, gloves, hazmat suits and protective glasses.

Police stopped the group on the highway and slapped them with fines for violating lockdown regulations. The group got to the hospital and delivered the gear, but then Vasilyeva was detained again, reportedly for defying police orders. Footage of the arrest activists posted on Twitter shows a dozen police officers gathering around Vasilyeva and two of them dragging her into the station.

Navalny retweeted the video on Thursday night, saying: “Why are they harassing this person, because she brought masks for the doctors?” As of Friday morning, Vasilyeva was still being held by the police in the Novgorod region.

Russia reported 4,149 cases of the new coronavirus on Friday. Despite the government assuring that Russia’s health care system is fully prepared to deal with the epidemic, doctors and hospitals from all over the country have been regularly complaining about the shortages of protective gear and medical equipment.

Alliance of Doctors has become one of the most vocal critics of the Kremlin’s response to the outbreak, accusing the authorities of downplaying the scale of it and pressuring medics to work without sufficient protection.

ANKARA, Turkey — Turkey is preparing to treat COVID-19 patients with blood donated from people who have survived the disease.

Kerem Kinik, the head of the Turkish Red Crescent organization, late Thursday called on “heroes who have come out victorious from the ‘Corona War’” to donate blood for the treatment that uses plasma from people who have recovered to help seriously ill patients.

Meanwhile, the Health Ministry sent a circular to the country’s 81 provinces setting out guidelines for the volunteer blood plasma donations, the state-run Anadolu Agency reported.

Ali Gur, rector of the Gaziantep University — one of the university hospitals working on the immune plasma therapy — told Anadolu: “We are completing our final preparations, we should be able to start the treatment by the end of April.”

ISLAMABAD — An influential Islamic clerics council in Pakistan is urging Muslims to worship at home instead of going to mosques for Friday prayers to contain the spread of the coronavirus. The pandemic has caused 34 deaths in the Islamic nation.

Mosques, however, will not be closed, and three to five people are allowed to enter.

The appeal from the Council of Islamic Ideology comes as the number of cases of COVID-19, the illness caused by the virus, increases. More than 2,400 people have tested positive in Pakistan.

Pakistan has enforced a nationwide lockdown, drawing criticism from many poor people who say they need to work to buy food and pay rent, utilities and other bills.

This week, Pakistan extended the lockdown until April 14 after a substantial increase in cases was reported in various parts of the country, especially in Punjab and Sindh provinces, the worst hit.

LONDON — Prince Charles is to officially open the new Nightingale Hospital that has been built in just nine days at the site of a huge exhibition center in east London.

The National Health Service hospital at ExCel London will within days be able to provide intensive care treatment for 4,000 people suffering from the COVID-19 disease.

Earlier this week, Charles emerged from a week of self-isolation after testing positive for coronavirus. He will launch the temporary facility later Friday via video link from his Scottish home of Birkhall and is expected to pay tribute to those who built it.

Health Secretary Matt Hancock, who also recently came out of isolation after recovering from the virus, is expected to be present.

PARIS — One of France’s largest insurance companies says it expects to save 100 million euros ($108 million) in traffic-accident payouts because of the coronavirus lockdown and that it will refund the money to clients.

In a letter to clients, the president and the CEO of the insurer, the MAIF, said “we believe that solidarity is the only viable solution in the face of today’s crisis and also for the world afterward.”

With tens of millions of people in lockdown, road traffic has dwindled to a trickle. MAIF’s executives said the lockdown is producing a “significant drop” in traffic accidents, generating an estimated 100 million euros of savings during the lockdown that the government says won’t be lifted before April 15, at the earliest.

The rebate will be offered to MAIF clients with vehicle insurance. They will also be offered the possibility to donate the refund to medics, vaccine research or charity. The company said clients will likely get about 50 euros ($54) each.

MAIF’s chief executive, Pascal Demurger, said traffic accidents are down by 75% to 80%. “Cars aren’t running, they are in garages and parking lots,” he said on BFM-TV.

SEOUL, South Korea — The South Korean capital of Seoul says it will ask more than 8,500 theatergoers to self-monitor at home after Canadian and American cast members of “The Phantom of the Opera” were found to have the coronavirus.

Seoul City official Na Baek-ju said Friday the musical’s international tour was halted following the positive test of an unidentified Canadian actress, who began experiencing throat pain and dry coughs days after she began performing at the city’s Blue Square theater on March 14. She last appeared on stage on Monday, a day before her test.

Officials have since tested 138 of her contacts, including colleagues and guests at the downtown Somerset Palace hotel, and confirmed the infection of an American actor on Thursday.

Na said officials were still awaiting test results for 48 people while the other 89 tested negative.

He said the hotel was ordered to prevent guests from leaving the property and stop taking new customers.

South Korea earlier on Friday reported 86 new cases of the coronavirus, bringing its nationwide total to 10,062.

PARIS — France’s prime minister says he and his government colleagues are “fighting hour by hour” to ward off shortages of essential drugs used to keep COVID-19 patients alive in intensive care.

Prime Minister Edouard Philippe said that worldwide usage of essential drugs and disposable equipment, such as ventilator mouthpieces, used by intensive care units is “exploding in unimaginable proportions,” with a “nearly 2,000% increase” in demand “because it is happening everywhere in the world and at the same time.”

In France, medics have identified eight drugs, in particular, that are essential for ICUs to keep treating the waves of gravely ill COVID-19 patients who need breathing assistance and other forms of life support, he said, speaking to broadcaster TF1 on Thursday night. Those drugs include painkillers and sedatives.

Philippe said France has sufficient stocks of some of the key ICU drugs but “more limited” quantities of others, causing “real” worry for medics. Philippe said he, French President Emmanuel Macron and their finance minister have been calling producers to identify supply bottlenecks and source more of these drugs. “We are fighting hour by hour to respond to this unheard-of increase in usage,” he said.

MANILA, Philippines — The Asian Development Bank forecasts that the coronavirus pandemic will cost the world economy as much as $4.1 trillion, or nearly 5% of all economic activity.

In an update Friday, the regional lender said growth in developing Asia would likely fall to 2.2% in 2020 from 5.2% last year. The Manila, Philippines-based bank said that Southeast Asia, a market of more than 600 million that has been rapidly growing, will likely log 1% growth this year.

The report said China, the region’s biggest economy, saw double-digit contractions in business activity in January-February and will likely see growth fall to 2.3% this year from a three-decade low of 6.1% in 2019. China, which is trying to get its economy back on track after unprecedented shutdowns in Wuhan, where the virus was first reported, and other parts of the country could suffer losses amounting to up to $692 billion if containment efforts drag on. But the ADB estimated that growth would bounce back next year to more than 7%.

SEOUL, South Korea -- South Korea says more than 27,000 people are under self-quarantine in the country after it strengthened border controls to slow coronavirus infections linked to international arrivals.