LEADING OFF: Soto on the block as Nats host Scherzer, Mets 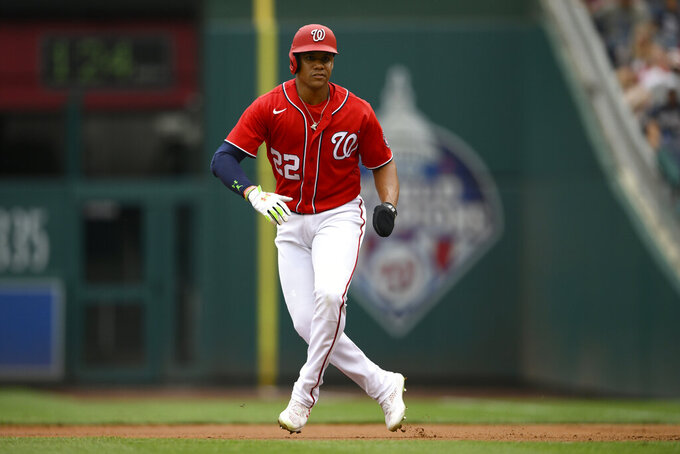 Washington Nationals' Juan Soto takes a lead from first during the first inning of a baseball game against the St. Louis Cardinals, Sunday, July 31, 2022, in Washington. (AP Photo/Nick Wass)

A look at what’s happening around the majors Monday:

Soto is the biggest name on the block, with Washington considering bids for the 23-year-old slugger after he turned down a $440 million, 15-year deal to stay with the team. Soto can be a free agent after 2024, and the St. Louis Cardinals, San Diego Padres and Los Angeles Dodgers are considered to be among the clubs most likely to persuade Nationals GM Mike Rizzo to unload his franchise cornerstone.

SCHERZER VS. CORBIN AS PRELUDE TO DEGROM

Scherzer, 92-47 in seven seasons with the Nationals, won at Washington on April 8 by allowing three runs and three hits over six innings. The three-time Cy Young Award winner is 1-1 with a 1.39 ERA in five starts since returning from a trip to the injured list caused by a strained oblique muscle.

Washington left-hander Patrick Corbin (4-14, 6.49) leads the major leagues in losses and his ERA is the highest among 63 qualified pitchers.

Mets co-ace Jacob deGrom is to make his season debut on Tuesday. The two-time NL Cy Young Award winner has not pitched for the Mets since July 7, 2021.

In the span of four days, Mike Trout went from his career in peril to possibly picking up a bat by the end of next week.

The Los Angeles Angels star visited Thursday with Dr. Robert Watkins, a back specialist and co-director of the Marina Spine Clinic in Los Angeles. Trout is slated to begin rotational exercises on Wednesday and could return to swinging a bat shortly after that.

“It went from my career is over to now hopefully I’m going to play here soon,” Trout said with a laugh.

Trout’s future appeared uncertain when athletic trainer Mike Forstad said before Wednesday’s game in Kansas City that the three-time AL MVP had a rare spinal condition and that it was an issue Trout could have to “manage not just through the rest of this season.”

“I think that’s what Frosty was initially getting at — keeping a routine so that it doesn’t come back,” Trout said. “Once you let it settle down, get the inflammation out of there and build the muscles up around, it’ll be good.”

San Francisco's Logan Webb is 1-2 in seven career starts against the Los Angeles Dodgers going into Monday's outing at Oracle Park despite a 3.28 ERA. Webb has held Los Angeles to a .219 batting average, allowing two homers in 35 2/3 innings. Andrew Heaney, 1-0 with a 0.47 ERA in four starts, will be on the mound for Los Angeles.

Cincinnati's Hunter Greene (3-12, 5.59) starts at Miami on Monday and is 0-5 in eight starts since beating Arizona on June 6. The Reds went 14-12 in July, improving to 40-61 and moving out of last place in the National League Central.