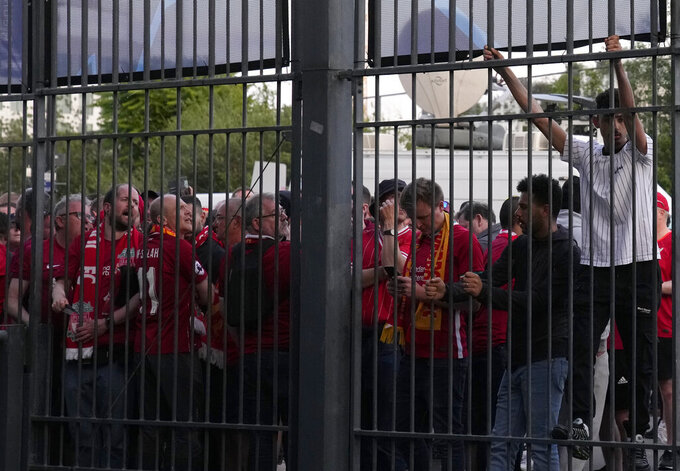 A fan climbs on the fence in front of the Stade de France prior the Champions League final soccer match between Liverpool and Real Madrid, in Saint Denis near Paris, Saturday, May 28, 2022. Police have deployed tear gas on supporters waiting in long lines to get into the Stade de France for the Champions League final between Liverpool and Real Madrid that was delayed by 37 minutes while security struggled to cope with the vast crowd and fans climbing over fences. (AP Photo/Christophe Ena)

PARIS (AP) — French President Emmanuel Macron and government members said they are “sad and sorry” for 2,700 Liverpool fans who had a ticket but couldn't get into the stadium amid disorder and chaos at the Champions League final in the Paris suburb of Saint-Denis, where Liverpool lost to Real Madrid 1-0.

The issue was discussed at the weekly Cabinet meeting at the Elysee presidential palace on Wednesday, French government spokesperson Olivia Grégoire said.

“Could we have done things better or could it have been better handled? Yes,” she told reporters. “Can we improve things, especially in view of the future sports events? Certainly.”

Saturday’s events prompted concerns in France and abroad about the country's ability to host major sporting events. France will host the Rugby World Cup next year and the 2024 Olympics.

In the wake of the chaos, Liverpool fans’ leadership groups complained about heavy-handed policing and poor organization on a troubling night that saw children and elderly people among those getting sprayed by tear gas.

Repeated allegations of brutality have been made against French police in recent years, notably during the Yellow Vests protests against the government, amid calls for police to exercise greater restraint. French police have also struggled to get a grip on fan violence at domestic soccer matches this season.

Liverpool said it has already collected more than 5,000 testimonies from supporters who traveled to France to attend the final. Liverpool chief executive Billy Hogan has reviewed some of the information and said he was “horrified by the way some men, women, children — able bodied, less able bodied — have been indiscriminately treated," both before and after the match.

According to the French Football Federation (FFF), 35,000 people without tickets or with “fake” tickets made their way to the Stade de France. It said they created disorder by blocking access to the stadium and preventing fans who had real tickets from getting into the venue.

European soccer’s governing body, UEFA, has also started to gather evidence about issues outside the Stade de France that marred one of the world’s biggest games in sports.

Grégoire expressed sympathy for 2,700 Liverpool fans, “fathers, mothers with their children disgusted they couldn’t attend a sports event they were waiting for. The President of the Republic and all the government were sad and sorry for these people.”

Grégoire said that interior and sports ministers will provide further details as they answer questions at a Senate’s commission on Wednesday afternoon.

Hogan also drew attention to what happened after the match.

“I do think it’s important to recognize we’ve all been rightly focused on the access issues at Stade de France,” he said. “I think it’s also important we don’t lose sight of what happened after the match. I think we’ve all seen videos, photos, I’ve read a number of stories of (fans') absolutely horrific experiences leaving the stadium as well – crimes being committed, muggings taking place.”