NHL reaches agreement to send players to Olympics in Beijing 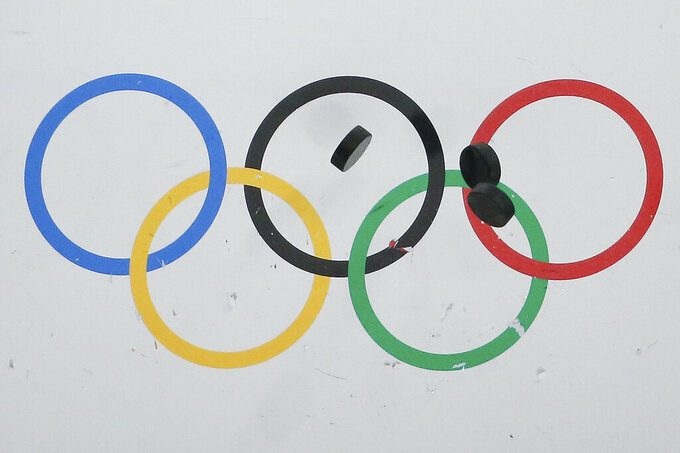 FILE - In this Feb. 22, 2014, file photo, hockey pucks bounce off the wall during the warm up session before the USA vs Finland men's bronze medal ice hockey game at the 2014 Winter Olympics in Sochi, Russia. National Hockey League players are set to return to the Olympics in Beijing this winter after reaching an agreement with international officials. The league, NHLPA, International Olympic Committee and International Ice Hockey Federation struck a deal Friday, Sept. 3, 2021, that will put the best players in the world back on sports' biggest stage in February after skipping the 2018 Winter Games in South Korea. (AP Photo/Matt Slocum, File)

The NHL is set to return to the Olympics in Beijing this winter after reaching an agreement with international officials, though the league and players have the opportunity to withdraw if pandemic circumstances warrant.

The NHL, its players' union, the International Olympic Committee and the International Ice Hockey Federation struck a deal Friday that will put the best players in the world back on sports' biggest stage in February after they skipped the 2018 Pyeongchang Games.

"It was not easy, but we did it," IIHF president Rene Fasel told The Associated Press by phone. “I’m really, really happy. When you see the last was 2014, and they would wait until 2026, so you have 12 years in between — that means we have a generation of hockey players that would not be able to play in the Olympics.”

Even after the NHL and players agreed to Olympic participation as part of a long-term extension of the collective bargaining agreement last summer, the coronavirus pandemic and related costs threatened to shelve that possibility. Instead, the sides figured it out, allowing for the league or players to withdraw if virus circumstances change for the worse or there's an outbreak during the season.

As long as that does not happen, NHL players will compete in the Olympic men's hockey tournament for the sixth time in seven chances dating to 1998.

“We understand how passionately NHL players feel about representing and competing for the countries," NHL Deputy Commissioner Bill Daly said. "We are very pleased that we were able to conclude arrangements that will allow them to resume best on best on the Olympic stage.”

COVID-19 insurance is not part of the agreement, though Fasel confirmed the IIHF will provide a $5 million fund for any lost salary because of the disease. Vaccinations are expected to be required, and players will have their contracts insured for injury.

U.S. coach Mike Sullivan called returning to the Olympics "such an exciting time for hockey.”

He is not alone in that thinking.

Reigning NHL MVP Connor McDavid played for an under-23 “Team North America” at the 2016 World Cup of Hockey and has yet to play for Canada in a tournament of the world's best men's hockey players.

"Just to be able to represent Canada at the Olympics and compete for a gold medal would be an absolute dream come true," McDavid told the AP this week. “It’s kind of been a long time since we’ve been able to play best on best internationally. I think for me, and I think for a lot of guys that were on that team, it’s been a long time coming. We’re obviously looking forward to going to the Olympics if we’re all lucky enough to make it.”

It could be the first Olympics for McDavid, U.S. star Auston Matthews, 2020 playoff MVP and two-time Stanley Cup champion Victor Hedman and many others. They didn't get the opportunity three years ago, when national teams were made up mostly of college and European professional players, except for the Olympic Athletes from Russia, who won the gold medal in Pyeongchang.

“The Olympics is one of the biggest dreams of mine and I haven’t been able to participate in one — this might be the last chance I get,” said Hedman, who was left off Sweden's 2014 Olympic roster. "When you get an opportunity to represent your country on the biggest stage, it is one of those things that you’ll probably never forget. So yeah for me it is obviously something that I’ve been dreaming about my whole life and something I want to do before I hang up my skates.”

In anticipation of a deal being reached, the NHL already scheduled a three-week break to take into account the Olympic tournament opening on Feb. 9. The league will still hold its All-Star weekend in Las Vegas before players fly to China on Feb. 6.

“It levels the playing field,” said Hall of Fame defenseman Chris Pronger, who made his Olympic debut in 1998 and won gold with Canada in 2010. “It allows more countries to compete at a higher level. It showcases the sport."

NHL players at the Olympics became commonplace, with the IOC agreeing to pay travel and insurance costs and owners willing to pause the season for players to take part in the tournament. An entire generation of players grew up knowing of Olympics being a showcase for NHL stars.

“You have a dream of representing your country,” said U.S. defenseman Ryan McDonagh of the Lightning. “The Olympic Games are such a unique experience, and I think they do wonders for the sport of hockey.”

The IOC under President Thomas Bach would not pay assorted costs in 2018, leading the NHL to turn away from the Olympics and league officials expressing their concerns about interrupting the season. Fasel said officials worked off the 2014 agreement and then made tweaks because of the pandemic.

Players ultimately decided it was worth handling any virus restrictions in Beijing, which could go above and beyond the quarantined bubbles of the 2020 playoffs.

“I don't think there'll be anything there that we haven't seen before,” Canada coach Jon Cooper said. “I do take comfort in the fact that we’ve been through all these different situations.”

NOTES: Should the NHL opt out for COVID-19 reasons, Fasel said the Olympic tournament would proceed with participating countries sending a team made up of non-NHL players. Such a scenario would potentially handcuff the United States and Canada, based on a limited pool of players to draw from because the tournament would interfere with the Canadian junior and U.S. college seasons. ... With the deal in place, USA Hockey filled out Sullivan's staff of assistants, which will be made up of Nashville Predators coach John Hynes, former New York Rangers coach David Quinn, Penguins assistant Todd Reirden and former NHL goalie Ryan Miller, who retired after after an 18-year career last season.