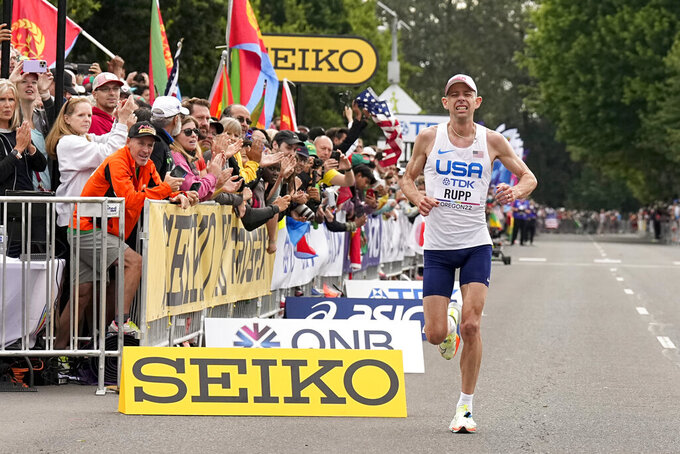 FILE - Galen Rupp, of the United States, finishes the men's marathon at the World Athletics Championships on Sunday, July 17, 2022, in Eugene, Ore. It's been 13 years since an American man won the New York City Marathon. Rupp might provide the best chance for the Americans to end that drought when he runs the New York race for the first time on Sunday, Nov. 6. (AP Photo/Gregory Bull, File)

NEW YORK (AP) — It's been 13 years since an American man won the New York City Marathon when Meb Keflezighi crossed the finish line first in 2009.

There's a strong international field, including defending champion Albert Korir of Kenya, expected on Sunday at the 51st running of the event. It might be difficult for that drought to end.

“I'm excited to be back in the U.S. Last year, I was champion after coming in second in 2019,” Korir said. “I'm ready, but know the field is competitive. I will try and push to defend my title.”

Galen Rupp might provide the best chance for the Americans when he runs the New York race for the first time. He's medaled twice in the Olympics — a silver in in the 10,000 meters at the 2012 London Olympics; a bronze in the marathon at the 2016 Rio Olympics. He won the 2017 Chicago Marathon.

“I'd love that,” Rupp said. “It's a great field for sure. I think America as a whole has improved dramatically on the track the last five to 10 years. It's good to see Americans being competitive.”

Rupp is coming off a 19th-place finish — tops for an American in the race — at the World Championships in July in Oregon. He was dealing with a back injury for that race, but is healthy now.

“I feel like things have come along the last couple of months,” Rupp said. “I'm optimistic for sure. I had a herniated disc and it takes a while to heal.”

The 29-year-old Jepchirchir is the only person to win the Olympic, Boston and New York City Marathons in a career — doing so in a ninth-month span in 2021 and 2022. She won last year’s race in New York in 2 hours, 22, minutes, 39 seconds, just 8 seconds short of the course record.

“With Peres not being in the race, I think it's really hard to figure out who will take the lead,” said Kenya-born American Aliphine Tuliamuk, who represented the U.S. at the Tokyo Olympics. “I'll see how I feel at the time when a move is made and whether I'll go with them.”

All of the pro runners were excited the NYC Marathon will be back to full strength. The race will be at full capacity with 50,000 runners for the first time since 2019. The 2020 event was canceled, and the 2021 race went off with a shrunken field of 25,010 runners because of the coronavirus pandemic.

An unseasonably warm day is forecast on Sunday, with temperatures approaching 70 degrees.

“I don't like it when it's that warm,” Korir said. “We can't do anything about the weather. You just have to drink more, so it will help you.”

Wheelchair participants Marcel Hug and Madison de Rozario will look to repeat as winners and potentially claim the $50,000 prize for besting the course record. Hug, a four-time winner in New York, was 2 minutes off the mark last year in 1:29.22.

“The condition, hopefully, will set up well with it being warm,” Hug said.

The marathon will offer $5,000 to the top non-binary runner in the race, marking the first time prize money is offered for that division. The New York Road Runners first introduced a non-binary category in June 2021. More than 60 runners are expected to compete in the category on Sunday.

“We wanted to make sure all of our gender divisions were represented in an equitable way,” New York Road Runners CEO Kerin Hempel said. “We are so proud that the race attracts such a diverse and global community of runners.”