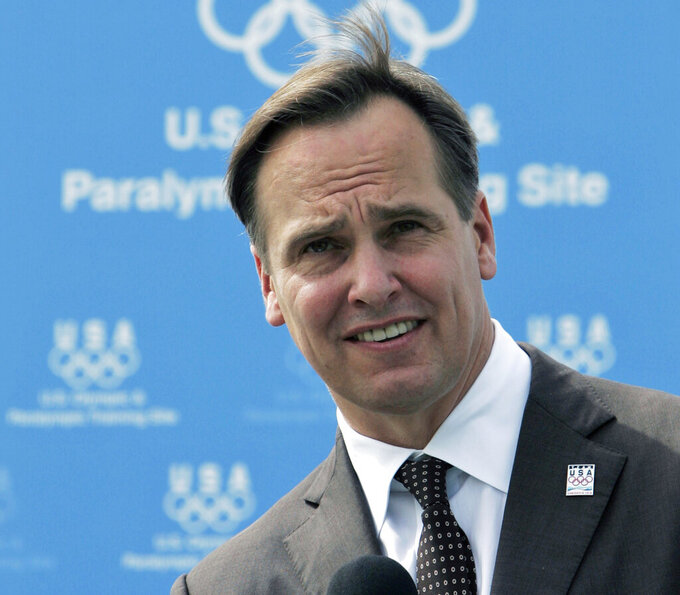 FILE - in this July 28, 2009, file photo, Norm Bellingham, an Olympic gold medalist in kayaking and chief operating officer of the USOC, speaks during a news conference in Oklahoma City. Gold medalist and former Olympic executive Bellingham and Olympian Eli Bremer have been named to a congressional committee to study possible reforms in America’s Olympic system. (AP Photo/File)

The picks must be made official by Rep. Greg Walden, an Oregon Republican who controls the spots and is retiring. He has given Lamborn the discretion to choose the members since the USOPC is in his home district, but his office has not yet confirmed the picks.

If approved, Lamborn's four choices will make up a quarter of the 16-person commission being created as part of the “Empowering Olympic, Paralympic, and Amateur Athletes Act" that was passed this year. It seeks reforms of the U.S. Olympic and Paralympic Committee.

Bellingham, who won a canoeing gold medal in 1988, also served as chief operating officer of what was then known as the USOC from 2006 through 2011. Bremer, a modern pentathlete at the 2008 Beijing Games, has been a longtime voice in calling for Olympic reform.

“The group represents a diverse array of knowledge in different areas who can help the movement,” said Han Xiao, the chair of the USOPC athlete advisory council.

One Democrat and one Republican in both houses of Congress are each allowed to appoint four members to the committee. Sen. Roger Wicker, R-Miss., has named two Olympians — John Dane, a member of the 2008 sailing team, and Brittney Reese, an Olympic-champion long jumper in 2012 — with two more selections to come.

The commission is required to submit a report next year that includes recommendations and suggested policy changes.

The law was written in response to multiple investigations about the failings of the USOPC and affiliated sports organizations in the wake of sex-abuse scandals. The headline grabber from the law was a provision that gives Congress the power to dissolve the USOPC's board of directors.

Since the bill was introduced, the USOPC has been working separately on reforms to increase the number of athletes in policy-making roles and improve oversight of national governing bodies that run the individual sports.

Xiao said the commission can further those efforts.

“It's a great opportunity to address some issues, and those opportunities don't come along very often,” he said. “It's a watershed moment that will determine how the movement works to protect athletes for the next several decades.”